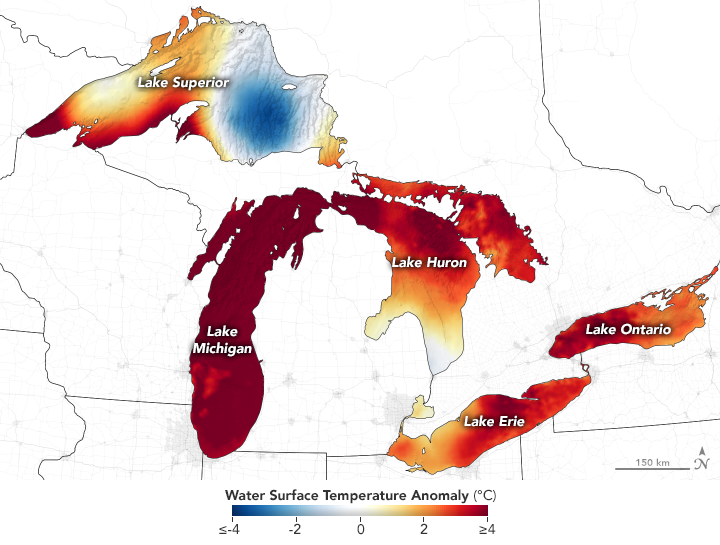 When the usually chilly Great Lakes feel like bath water, you know it has been a warm summer. When the water is that warm at the beginning of July, you know that some records are in jeopardy.

Just a few months after an unusually warm winter left the Great Lakes mostly free of winter ice, the surface temperatures of the lakes are now near or above records for this time of year. Late June and early July brought several weeks of persistent high atmospheric pressure, clear skies, hot air temperatures, and light winds, allowing surface waters to warm significantly in the summer sunlight.

The map above shows water surface temperature anomalies for July 9, 2020; that is, how much the surface layer of each lake was above or below the long-term average temperature (2003-14) for this time of year. The data come from the Multiscale Ultrahigh Resolution Sea Surface Temperature (MUR SST) project, based at NASA’s Jet Propulsion Laboratory. MUR SST blends measurements of sea surface temperatures from multiple NASA, NOAA, and international satellites, as well as ship and buoy observations.

According to the map above and NOAA reports, surface temperatures are 6° to 10° Fahrenheit (3° to 5° Celsius) above normal for early July. The average lake water temperature across all of Lake Erie—the shallowest lake—was 74.29°F on July 15; it was 59.83°F across Lake Superior, the largest lake. On the weekend of July 10-12, water temperatures for beachgoers in the shallower coastal areas of Lake Michigan, Huron, Erie, and Ontario ranged from 75°F to 85°F. The only area below normal was the eastern portion of Lake Superior.

Jia Wang, a climatologist at the NOAA Great Lakes Environmental Research Laboratory, noted that the dearth of winter ice cover and early melting has likely caused portions of the Great Lakes to stratify (form layers) sooner than usual. Such layering of warmer water near the surface can reinforce temperature patterns and keep cooler water from upwelling through the thermocline. “Then the surface water gets warmer,” Wang said. “This is a seasonal positive feedback between the stratification and the surface water temperature.”

NOAA oceanographer Richard Stumpf reported that the annual bloom of cyanobacteria (often called blue-green algae) in Lake Erie arrived a few weeks earlier than normal, likely due to the warm water. He noted that the dominant species, Microcystis aeruginosa, prefers water temperatures above 68°F (20°C), with growth rates increasing with the temperatures. However, Stumpf and colleagues are only forecasting a moderate bloom for the lake this summer. While water temperatures are high, the amount of nutrient runoff (mainly from fertilizers) has been somewhat lower this year due to less snow and rain in winter and spring.

Beyond the warm water temperatures, lake levels also rose to unusually high levels in some places. In May 2020, Lakes Erie, Michigan, and Huron (and nearby Lake St. Clair) set records for water heights according to the Army Corps of Engineers; in June, Lakes Michigan and Huron repeated the pattern, standing a full 5 inches (12 centimeters) above the record. The lakes started July above record levels.

Long-term NOAA data show that the Great Lakes usually reach their peak temperatures in August. If water temperatures stay high into autumn, it is possible that evaporation and lake-effect precipitation could be enhanced when colder seasonal winds blow over the lakes. But there are several months and many weather variables between now and such an outcome.