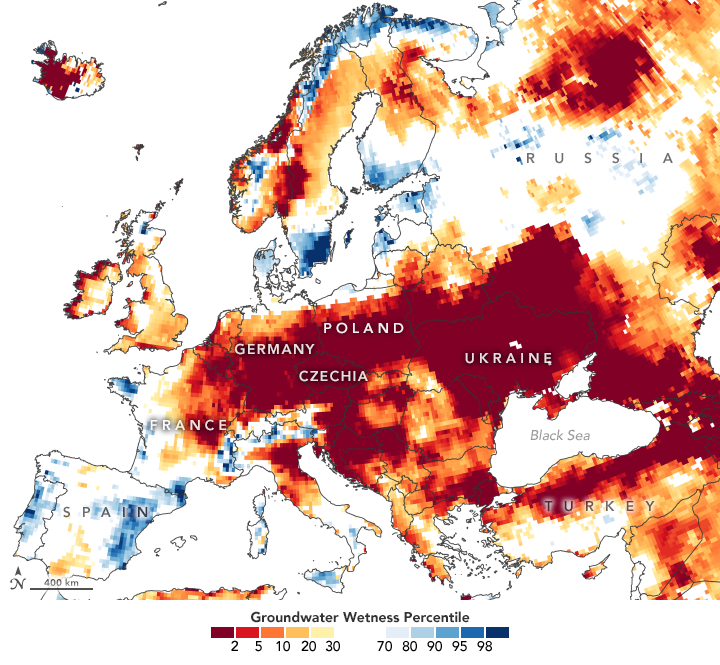 The 2019-20 winter in Europe was the warmest on record, with little snow. The spring was also drier and warmer than normal, with a historic heat wave in the middle of May. The forecast for summer 2020 is not looking much better. For the third year in a row, Europe is facing potential water woes.

According to the Copernicus Climate Change Service (C3S), meteorological drought conditions started in eastern Europe in early spring 2020 and migrated across the continent with drier-than-normal weather in April and May. Tributaries and main stems of some of the continent’s rivers—such as the Elbe, Warta, and Danube—fell below normal seasonal flow. In late May and June, surface soil moisture and waterways in some areas rebounded a bit after heavy rain showers. And all of this occurred as 2020 continued to be one of the hottest years on record globally.

In their seasonal review and forecast, C3S meteorologists predicted below-average precipitation for southern and eastern Europe in June, July, and August. The GEOGLAM Crop Monitor, a Group on Earth Observations initiative to monitor agricultural conditions and food security around the world, put much of central and eastern Europe and southwestern Russia under a “watch” for potential drought impacts on wheat production.

The maps on this page show shallow groundwater storage (above) and root zone soil moisture (below) in Europe as of June 22, 2020, as measured by the Gravity Recovery and Climate Experiment Follow On (GRACE-FO) satellites. The colors depict the wetness percentile; that is, how the levels of groundwater and soil moisture compare to long-term records for the month. Blue areas have more abundant water than usual, and orange and red areas have less. The darkest reds represent dry conditions that should occur only 2 percent of the time (about once every 50 years). 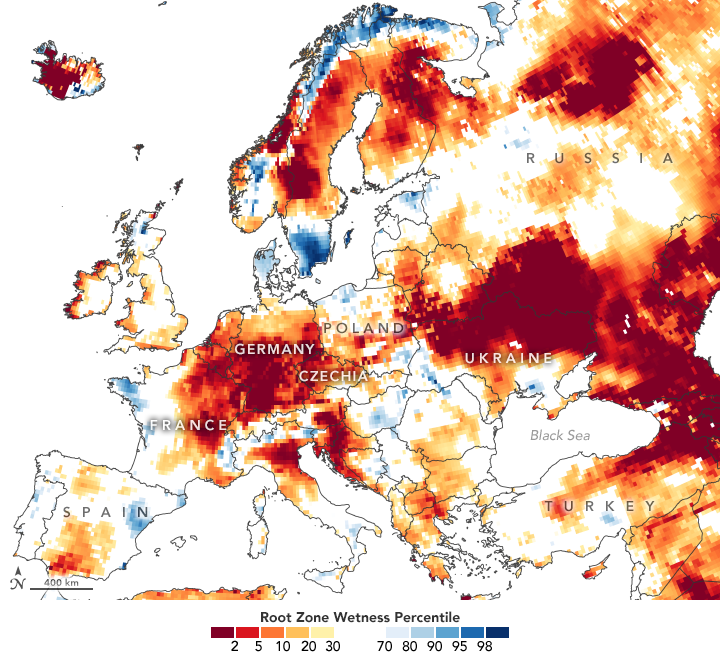 Note the differences between the groundwater and root zone moisture maps. Monitoring root zone moisture is essential for managing agriculture because it is the water naturally available for growing crops. Soil moisture at Earth’ surface and in the root zone can fluctuate significantly over short periods of time; it can be quickly replenished by rainfall, but also can evaporate rapidly during heat waves and dry spells. In fact, recent rains in parts of Europe have significantly reduced surface moisture deficits.

Groundwater is a deeper resource for crop irrigation and drinking water, and it also sustains streams during dry periods. Unlike surface and root zone moisture, groundwater takes months to rebound, as it has to be slowly and steadily replenished by surface moisture that seeps down through soil and rock to the water table. Because much of Europe experienced drought in the summers of 2018 and 2019, and saw little snow in the winter of 2019-20, much of the continent began this year with a significant deficit.

“In recent years, Central Europe has experienced a series of droughts caused by exceptionally stable weather patterns and high temperatures that can both be linked to climate change,” said Wolfgang Wagner, a remote sensing scientist at Technische Universität Wien. “The fact that some regions have experienced drought conditions in several consecutive years has already caused significant damage to forests (due to bark beetle infestation) and declines in groundwater levels.”

After six years of rainfall deficits, the Czech Republic reported this spring that nearly 80 percent of its wells were recording mild to extreme drought. The country’s soil moisture in May was at least 30 percent below normal. Some climatologists called it the country’s worst drought in 500 years. In neighboring Germany, underground water storage has also been depleted in recent years.

In Ukraine, the water level in the Desna River reached it lowest point in 140 years of observations—a full 5 meters below normal for springtime. The Dnieper watershed, the source of half of the country’s water needs, received just 70 percent of its usual rainfall from September through May. In early June, reservoirs around Kyiv stood at their lowest levels in nearly a century. Extreme rain in late June should significantly improve surface conditions in the near term, but much of it could run off (rather than percolating down to the groundwater) because parched soil does not readily soak up water.

Polish climatologists reported one of its worst droughts in a hundred years, with agricultural drought in 11 of 16 provinces. More than 40 rivers and streams fell substantially below normal levels by May 2020, low flows that came just months after the Vistula dropped to its lowest level on record in 2019. The low water levels posed trouble for the electric power industry, which sometimes cannot draw enough water for cooling.

“From the global food security and agricultural commodities perspective, Europe is important because it is one of the largest wheat-producing regions in the world, and also a major maize-producing region. Both wheat and maize are major food security crops,” said Brian Barker, a leader of the GEOGLAM group and scientist at the University of Maryland. “The persistent rainfall deficits, combined with the above-average temperatures since winter, have negatively affected large areas across Europe, reducing forecasted crop yields compared to the five-year average in a number of countries.”

The maps on this page are based on data from the Gravity Recovery and Climate Experiment Follow On (GRACE-FO) satellites, a pair of spacecraft that detect the movement of water based on variations of Earth’s gravity field. GRACE-FO measures subtle shifts in gravity from month to month. Variations in land topography or ocean tides change the distribution of Earth’s mass; the addition or subtraction of water also changes the gravity field. Those data are integrated with data from the original GRACE mission (2002-2017) and with current and historical ground-based observations, using a sophisticated numerical model of water and energy processes at the land surface. 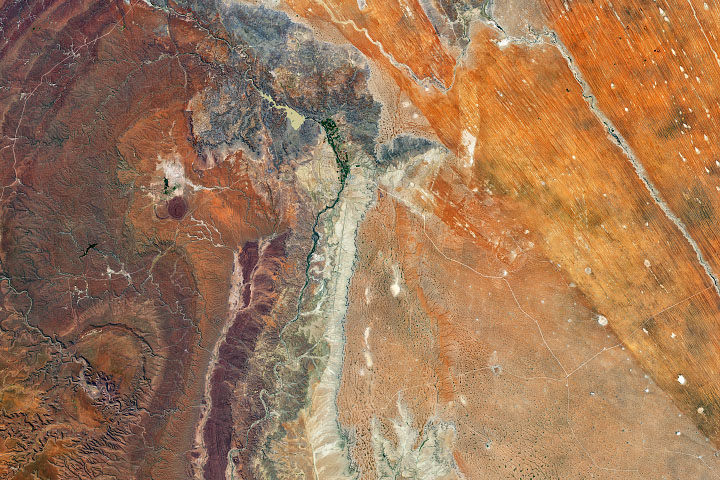