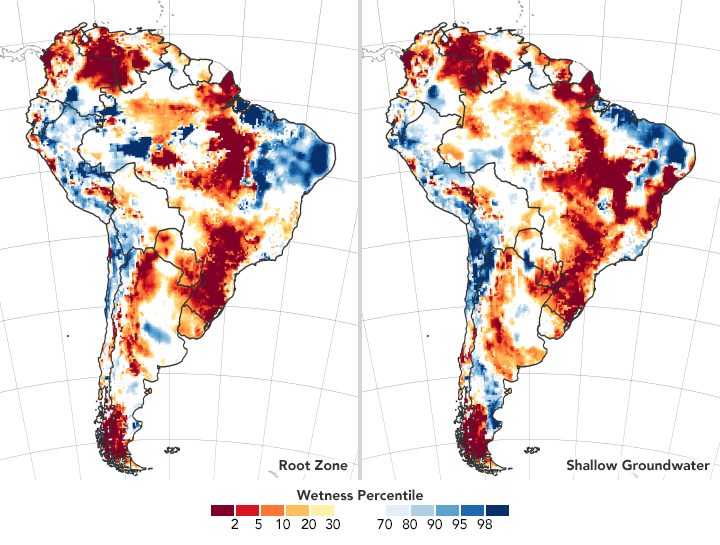 As South America moves into autumn, several parts of the continent are facing rainfall deficits and droughts that might shrink harvests. Twin satellites from NASA and the German Research Center for Geosciences are providing fresh insights into the conditions.

Rainfall in the summer of 2020, and specifically in March, has been as much as one-third below normal in Brazil’s Mato Grosso do Sul, São Paulo and Paraná states, according to several news reports. Likewise, northern Argentina, Chile, Colombia, and Venezuela all reported rainfall deficits and drought conditions in February and March.

The dry weather was matched by excessive heat. According to the U.S. National Centers for Environmental Information, South America had its second warmest December to February period in 110 years of records. On a global scale, February marked the 44th consecutive February and 422nd consecutive month with temperatures higher than the 20th Century average.

The maps are based on data from the Gravity Recovery and Climate Experiment Follow On (GRACE-FO) satellites, a pair of spacecraft that detect the movement of water based on variations of Earth’s gravity field. GRACE measures subtle shifts in gravity from month to month. Variations in land topography or ocean tides change the distribution of Earth’s mass; the addition or subtraction of water also changes the gravity field. Those data are integrated with other ground-based observations using a numerical model of water and energy processes at the land surface.

After providing such maps for the United States since 2012, the GRACE team has just started releasing weekly global maps of groundwater and soil moisture. They are are distributed online by the National Drought Mitigation Center at the University of Nebraska-Lincoln (UNL).

“The global products are important because there are so few worldwide drought maps out there,” said hydrologist and project lead Matt Rodell of NASA’s Goddard Space Flight Center. “Droughts are usually well known when they happen in developed nations. But when there’s a drought in central Africa, for example, it may not be noticed until it causes a humanitarian crisis. So it is valuable to have a product like this where people can say, wow, it’s really dry there and no one’s reporting it.”

Monitoring soil wetness is essential for managing agricultural crops and predicting their yields because soil moisture is the water available to plant roots. Groundwater is often the source of water for crop irrigation, and it also sustains streams during dry periods.

“Drought is really a key topic for a lot of projections of climate and climate change. The emphasis is on getting more relevant, more accurate, and more timely drought information, whether it be soil moisture, crop health, groundwater, streamflow, and the GRACE missions are central to this,” said Brian Wardlow, director for the Center for Advanced Land Management Information Technologies at UNL. “These types of tools are absolutely critical to helping us address and offset some of the impacts anticipated, whether they be from population growth, climate change, or just increased water consumption in general.”