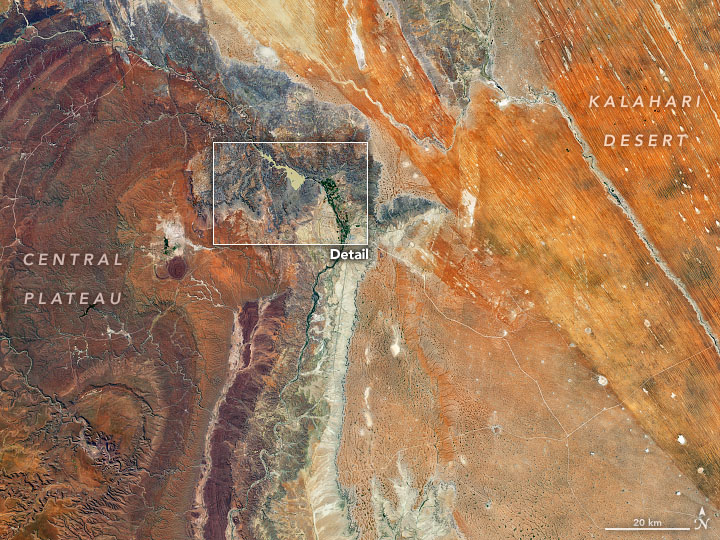 The image above shows the convergence of two contrasting geologic regions near the town of Mariental in south-central Namibia. The semi-arid sandy savannah of the Kalahari Desert lies to the east of the town, while the rocky plains of the Central Plataeu are located to the west. The image was acquired on May 9, 2020, by the Operational Land Imager (OLI) on Landsat 8.

The Kalahari Desert and Central Plateau are two of the main topographic regions across the country. The Kalahari Desert is a large plain that covers the eastern third of Namibia as well as northern parts of South Africa and nearly all of Botswana. The area is covered by sand that generally appears red due to a thin coating of iron oxide.

Covering the middle stretch of the country from north to south, the Central Plateau is divided between rugged mountains and sandy valleys. It holds much of the country’s population, the nation’s capital, and the Etosha Pan. With many large farms and ranches located in its rolling hills, it contains much of Namibia’s arable land.

Originally founded as a railway stop in 1912, Mariental lies in between the two zones in a hot, arid region that receives little precipitation. Its main economic activities are game farming rather than traditional farming. Specifically, Mariental is a hub for farming sheep and processing sheep skins. It is also known for farming ostrich, which can survive well under the arid conditions. 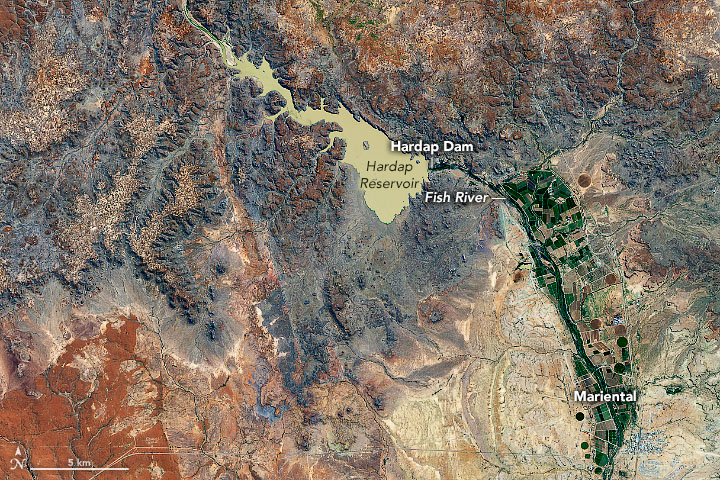 Since the town sees so little rain, people get much of their water from the Hardap Dam located 22 kilometers (14 miles) to the northwest. The country’s largest dam controls the flow of the Fish River and provides water for irrigation to grow animal feed. The lake is also important for fish farms and provides a breeding area for the great white pelicans. The image above shows the Hardap Dam.

The region around the dam is also a popular tourist destination. A resort in the area holds annual competitions for anglers, and visitors can also participate in water sports like canoeing and boating. The area is also home to a game reserve for black rhinos, jackals, and giraffes.

The town of Mariental sits at the convergence of the Kalahari Desert and the Central Plateau.