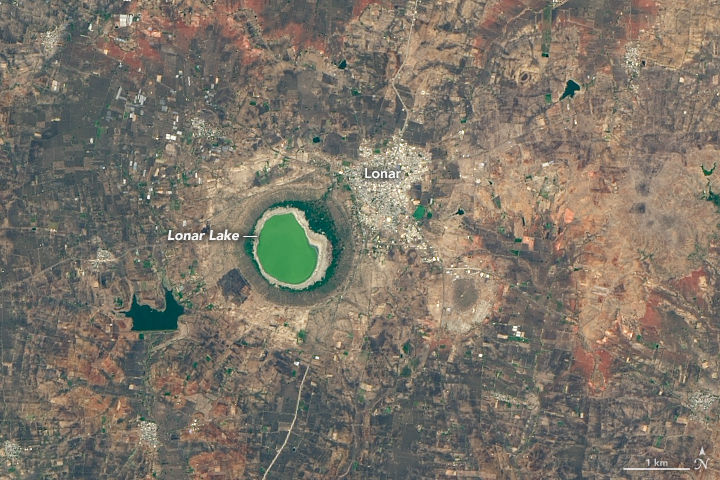 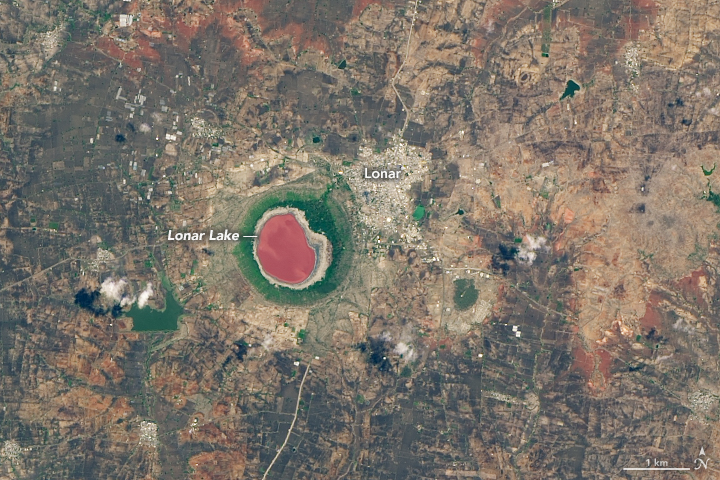 In early June 2020, a crater lake in west-central India promptly changed from green to pink. For now, the reason why remains a mystery.

Lonar Lake’s color shift occurred over the span of a few days. The change is visible in this image pair, acquired on May 25 and June 10 with the Operational Land Imager (OLI) on Landsat 8.

Scientists collected samples from the lake and are awaiting lab results before they can say with certainty what caused the change. They speculate, however, that the color could be a result of microscopic life that thrives in water with high salt concentrations.

Lake Hillier in Australia, for example, is thought to get its hue from Halobacteriaceae, a pink-colored microorganism that thrives in water with high salinity. That lake also has a type of single-celled algae called Dunaliella salina. When water conditions are favorable, D. salina are green. But under stressful conditions, such as high salinity or high amounts of light, the algae produce protective carotenoids, including orange-red beta carotene.

Australia’s Lake Hillier, however, is persistently pink and does not change over the span of a few days. One explanation for the rapid change in India’s Lonar Lake could be a rapid rise in salinity as evaporation during warm, dry weather in the area has caused water levels to drop. A similar phenomenon happens to Iran’s Lake Urmia during spring and summer, when the lake grows smaller and saltier prompting the microorganisms show their colors.

Lonar Lake (also known as Lonar Crater) is located in India’s west-central state of Maharashtra. The crater was initially thought to have a volcanic origin due to its location amid volcanic basalt of the Deccan Plateau. Scientists in the 1970s, however, confirmed the presence of maskelynite—a naturally occurring glass that is only formed by extremely high-velocity impacts. Formed 35,000 to 50,000 years ago, Lonar is the only “fresh” impact structure in basalt on Earth, making it an important analog for impact craters on the surface of the Moon.