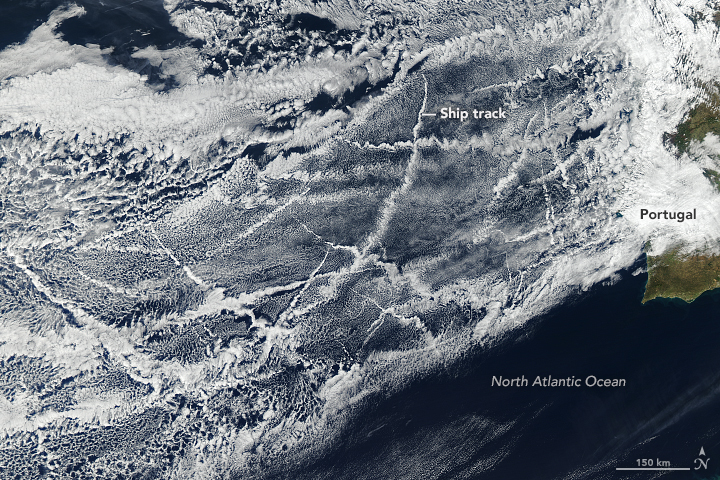 As ships cruise across the ocean, they emit a large number of small airborne particles—aerosols—into the lower atmosphere. Under the right conditions, these exhaust particles cause long, thin cloud patterns referred to as “ship tracks.” For decades, scientists have theorized that these cloud changes might alter climate by affecting the amount of sunlight reaching Earth’s surface.

Now, for the first time, researchers have measured exactly how ship emissions affect clouds at a regional scale. University of Washington scientist Michael Diamond and colleagues examined more than a decade of cloud patterns over a busy shipping lane in the southeast Atlantic that connects Europe to southern Africa and Asia.

The team measured the cloud properties inside the shipping corridor using satellite data and compared them to what they estimated the values would be without shipping activity. The scientists found that the shipping activity increased the number of cloud droplets over the shipping lane. They further showed that those clouds prevented about 2 Watts of solar energy from reaching each square meter of ocean surface along the shipping lane. The team’s results agreed with previous computer modeling studies that predicted a sizeable cooling effect due to shipping.

“If you look at a satellite image of a high-traffic shipping area, when the weather conditions are right, you can clearly see bright lines of clouds right along where those ships are traveling and emitting aerosols,” said Diamond, an atmospheric scientist. ”Ship tracks are a prime example of how tiny particles of pollution in the atmosphere can influence cloud properties. The clearly visible ship tracks are only the tip of the iceberg, however, so our study looked at how shipping could affect cloud properties on average over a long time period.“

The natural-color image above shows an example of ship tracks over the southeast Atlantic Ocean as observed on January 18, 2018, by the Moderate Resolution Imaging Spectroradiometer (MODIS) on NASA’s Aqua satellite. The maps below show the average cloud droplet concentrations from 2003 to 2015 during the cloudiest months for the region (September, October, and November). The map on the left shows the cloud droplet concentrations observed by MODIS on NASA’s Aqua and Terra satellites. The map on the right shows the expected cloud droplet concentrations without shipping activity. The expected values were calculated based on statistical patterns from nearby, unpolluted areas. The team then calculated the difference in the amount of sunlight reflected back into space between the two scenarios. The team used data from NASA’s Clouds and the Earth’s Radiant Energy System (CERES) instruments, which monitor the solar energy reflected by Earth and the heat energy emitted by the planet. 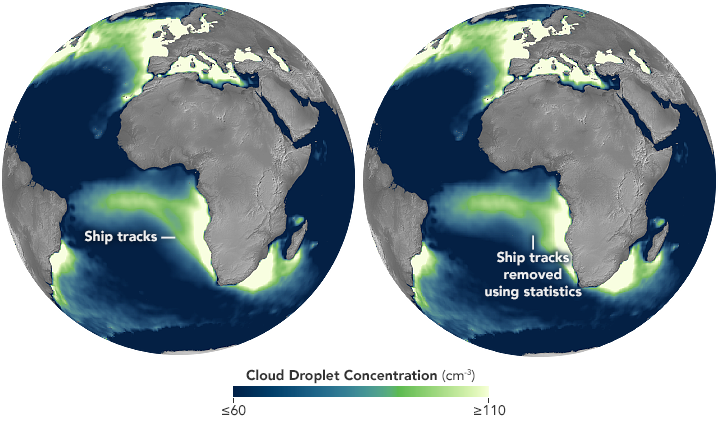 Diamond explained that the aerosols from the ships create “seeds” in the atmosphere that water vapor can latch onto and condense into small cloud droplets. These smaller droplets make clouds brighter so that they eflect more sunlight, which creates a local cooling effect at the planet’s surface.

That change is small on a regional scale, but it could be enough to affect global temperatures if the same phenomenon occurs worldwide, according to study co-author Hannah Director of the University of Washington. When the team scaled their findings across the planet, they found that changes in low-lying clouds from all industrial pollution sources could block about 1 Watt of energy per square meter globally. For context, greenhouse gases from industrial activities have trapped roughly 3 Watts per square meter so far.

“Cloud changes caused by industrial pollution have produced a global cooling effect that is about one-third as strong as the warming from increased greenhouse gases,” said Diamond.

Diamond explains that even though these ship emissions have a short-term cooling effect, they create other issues. Pollutants from ship exhaust have detrimental effects on human health, while also adding carbon dioxide to the atmosphere.

The algorithms developed for this study could be applied to study other anthropogenic sources of pollution around the world. “We can use a similar methodology to determine the effects of other human sources of aerosols like power plants,” said Diamond. “We could model the world with and without various human activities and better understand our impact on Earth's climate.”

They may look like airplane contrails, but the streaky clouds shown in this photo-like image formed around the exhaust left in the wake of ships traveling along the northwest coast of North America.