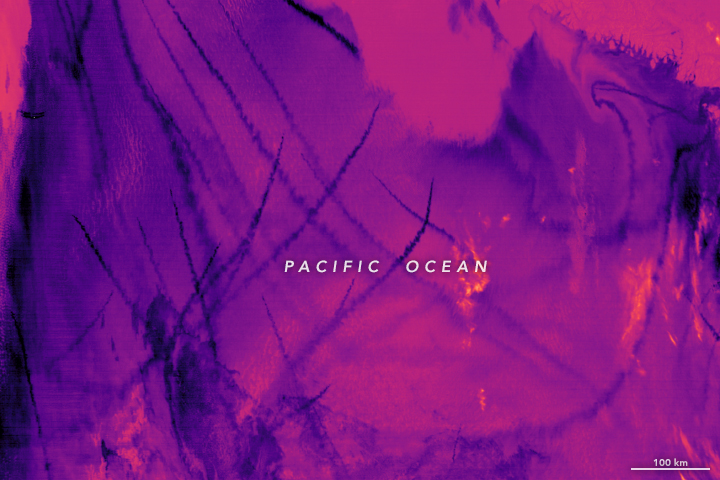 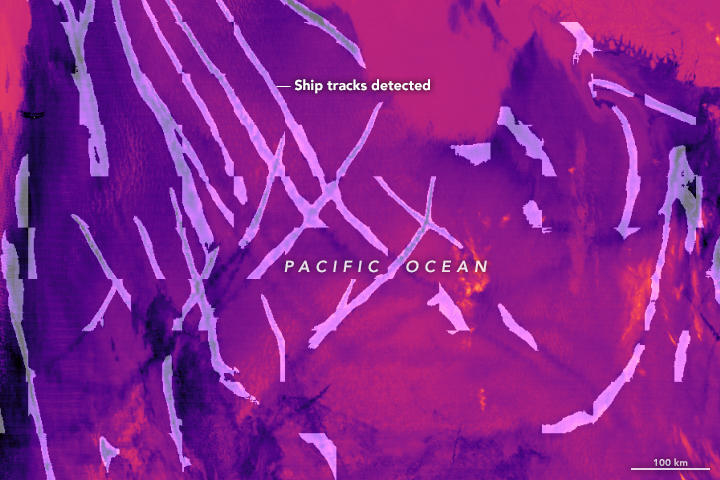 Ocean-crossing ships leave more than just wakes in the water. They also emit particles that ultimately form thin, winding clouds known as “ship tracks.” For decades, scientists have been studying the phenomenon in order to understand the complex interactions between aerosols and clouds and to decipher what those interactions mean for climate change.

But researchers have not had enough ship tracks to study. The way a cloud reacts to the presence of aerosols can vary wildly in different environmental scenarios, so researchers need a lot of examples from which to draw solid conclusions. They could soon have more ship tracks to study thanks to a new model that can automatically detect ship tracks in satellite images.

This pair of images of the Pacific Ocean off of the west coast of North America demonstrates the model’s ability to successfully detect ship tracks. The images were acquired at night on April 22, 2005, by the Moderate Resolution Imaging Spectroradiometer (MODIS) on NASA’s Aqua satellite. They are false color and show the infrared brightness temperature difference between two of the sensor’s channels.

The difference in brightness temperature can be used to infer the difference in water droplet size in clouds, which allows scientists to differentiate cloud types. Ship tracks, which have droplets much small than those of surrounding clouds, show up in the left image as dark purple lines. They meander in the scene below high cirrus clouds (bright orange) and amid other types of low clouds (light purples and pinks). The right image shows the same scene overlaid with lines (lavender) where the model automatically detected ship tracks.

Researchers described the model in a paper published online on June 20, 2019, in Geophysical Research Letters. Tianle Yuan, an atmospheric scientist at NASA’s Goddard Space Flight Center and University of Maryland Baltimore County, explained that he and colleagues used a machine-learning technique to automate the detection.

“This is the first time we have a working computer algorithm that can identify ship-tracks at this level of performance. It can not only find ones that are labelled by humans, but also sometimes pick up those missed by human experts,” said Yuan, lead author of the paper. “This model not only remembers the training. It understands what’s going on—what the model should be looking for.”

The team is currently working to improve model performance at high latitudes, where the edge between sea ice and open water can be mistaken for ship tracks. Once that’s done, Yuan and colleagues plan to make the data publicly available for researchers to analyze.

Work is already underway to animate the ship track data to see how cloud responses change not only by location, but over time. “Imagine you see a crime scene and take just one picture, instead of seeing all of the events,” Yuan said. “Without context, you might draw a particular conclusion when reality might be different.”