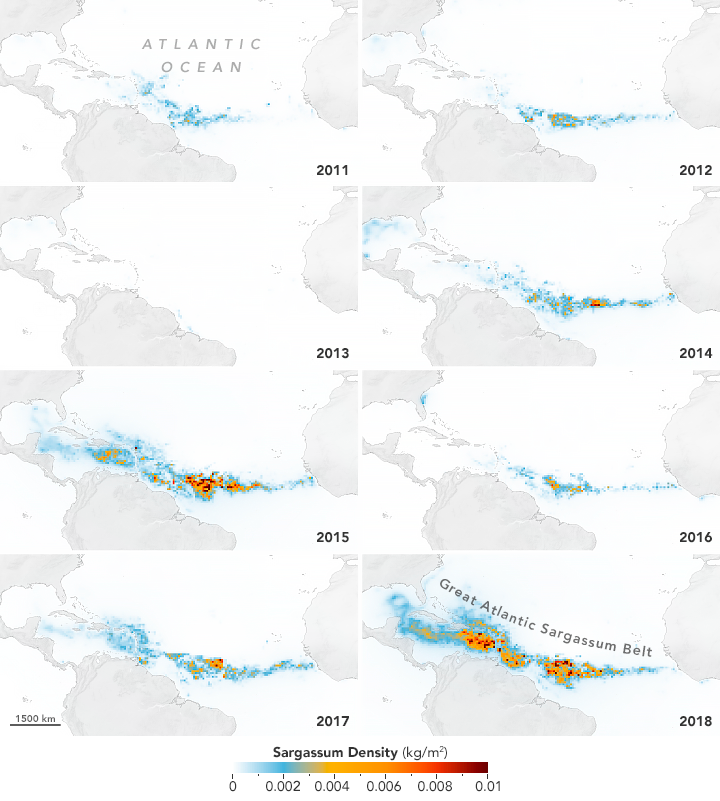 Scientists using NASA satellite observations have discovered the largest bloom of macroalgae in the world. In a paper published on July 5, 2019, in Science, researchers described new observations of the “Great Atlantic Sargassum Belt.”

Led by researchers from the University of South Florida (USF) College of Marine Science, the team confirmed that the belt of brown macroalgae called Sargassum can grow so large that it blankets the surface of the tropical Atlantic Ocean from the west coast of Africa to the Gulf of Mexico. This happened in 2018 when more than 20 million tons of Sargassum—heavier than 200 fully loaded aircraft carriers—floated in surface waters and wreaked havoc on shorelines in the tropical Atlantic, the Caribbean Sea, and the Gulf of Mexico.

The scientists used environmental data and some direct ocean sampling to suggest that the belt forms seasonally in response to two key nutrient inputs. In the spring and summer, Amazon River discharge adds nutrients to the ocean, and those nutrients may have increased in recent years due to increased deforestation and fertilizer use. In the winter, upwelling off the West African coast delivers nutrients from deep waters to the ocean surface where the Sargassum grows. Based on numerical simulations, the scientists found that the bloom takes its shape in response to prevailing ocean currents.

“The evidence for nutrient enrichment is preliminary and based on limited field data and other environmental data, and we need more research to confirm this hypothesis,” said USF scientist Chuanmin Hu, who led the study and has studied Sargassum using satellites since 2006. “On the other hand, based on the last 20 years of data, I can say that the belt is very likely to be a new normal.”

“Earth’s ocean biogeochemistry is changing in response to natural and human forcings,” said Paula Bontempi, who manages NASA’s Ocean Biology and Biogeochemistry Program. “The Great Atlantic Sargassum Belt suggests that we may be witnessing ecosystem shifts that could have important implications for marine organisms and ecosystem services on which humans depend.”

Hu spearheaded the work with first author Mengqiu Wang, a postdoctoral scholar in his Optical Oceanography Lab at USF. The team included others from USF, Florida Atlantic University, and Georgia Institute of Technology. Key data for the study came from the Moderate Resolution Imaging Spectroradiometer (MODIS) instruments on NASA’s Terra and Aqua satellites.

The map at the top of this page depicts the monthly mean density of Sargassum in the Atlantic Ocean in each July from 2011 to 2018. Photos below show abundant Sargassum off of the Florida Keys in 2014 and along a beach in Cancun, Mexico in 2015. The plot near the end of the story shows the monthly mean area covered by the seaweed, as observed by MODIS from 2000 to 2018. 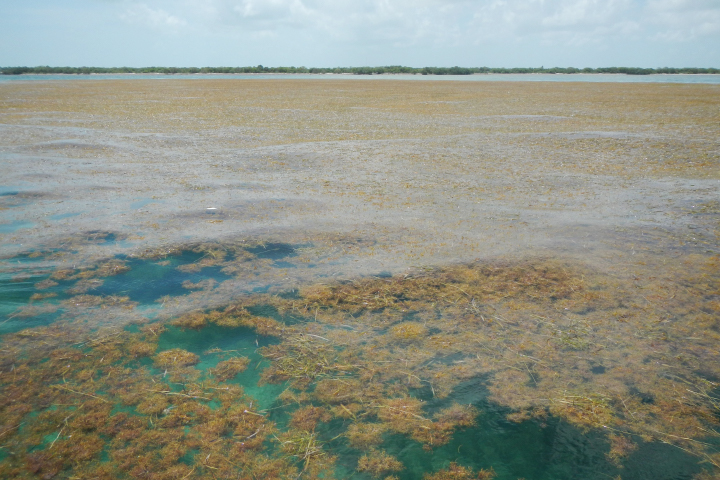 In patchy doses in the open ocean, Sargassum contributes to ocean health by providing habitat for turtles, crabs, fish, and birds and by producing oxygen via photosynthesis. But too much of this seaweed makes it hard for certain marine species to move and breathe, especially when the mats crowd the coast. When Sargassum dies and sinks to the ocean bottom in large quantities, it can smother corals and seagrasses. On the beach, rotten Sargassum releases hydrogen sulfide gas and smells like rotten eggs.

Before 2011, most of the pelagic Sargassum in the ocean was primarily found floating in patches around the Gulf of Mexico and Sargasso Sea. The Sargasso Sea is located on the western edge of the central Atlantic Ocean and named after its popular algal resident. Christopher Columbus first reported Sargassum in the 15th century, and many boaters are familiar with this seaweed.

In 2011, Sargassum populations started to explode in places they hadn’t been before, and it arrived in vast amounts that suffocated shorelines and introduced a nuisance for local environments and economies. Some countries, such as Barbados, declared a national emergency in 2018 because of the toll this once-healthy seaweed took on tourism. 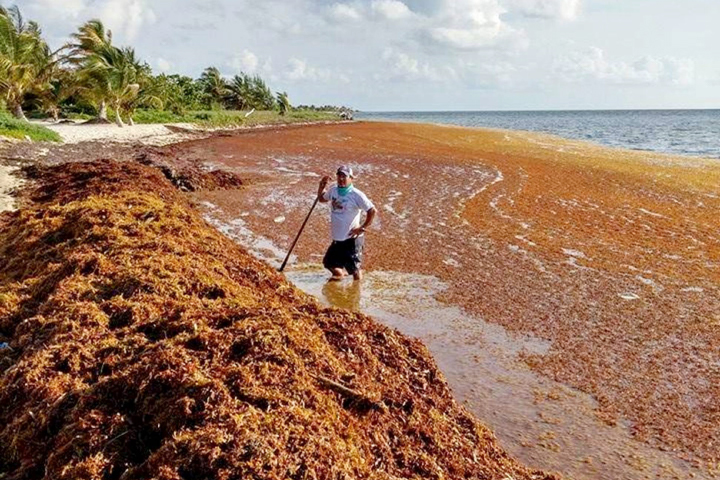 “The ocean’s chemistry must have changed in order for the blooms to get so out of hand,” Hu said. Sargassum reproduces vegetatively, and it probably has several initiation zones around the Atlantic Ocean. It grows faster when nutrient conditions are favorable and when its internal clock ticks in favor of reproduction.

Wang, Hu, and colleagues analyzed fertilizer consumption patterns in Brazil, Amazon deforestation rates, Amazon River discharge, and nitrogen and phosphorus measurements taken from parts of the Atlantic Ocean, among other ocean properties. While the data are preliminary, the pattern seems clear: the explosion in Sargassum correlates to increases in deforestation and fertilizer use, both of which have increased since 2010.

The team identified key factors critical to bloom formation: a large seed population in the winter left over from a previous bloom; nutrient input from West Africa upwelling in winter; and nutrient input in the spring or summer from the Amazon River. In addition, Sargassum only grows well when salinity is normal and surface temperatures are normal or cooler. As noted in the images above, major blooms occurred in every year between 2011 and 2018 except 2013. No bloom occurred that year because the seed populations measured during winter of 2012 were unusually low, Wang said.

“This is all ultimately related to climate change because it affects precipitation and ocean circulation and even human activities, but what we’ve shown is that these blooms do not occur because of increased water temperature,” Hu said. “They are probably here to stay.”

“The scale of these blooms is truly enormous, making global satellite imagery a good tool for detecting and tracking their dynamics through time,” said Woody Turner, manager of NASA’s Ecological Forecasting Program.