Rolling Through the Appalachians 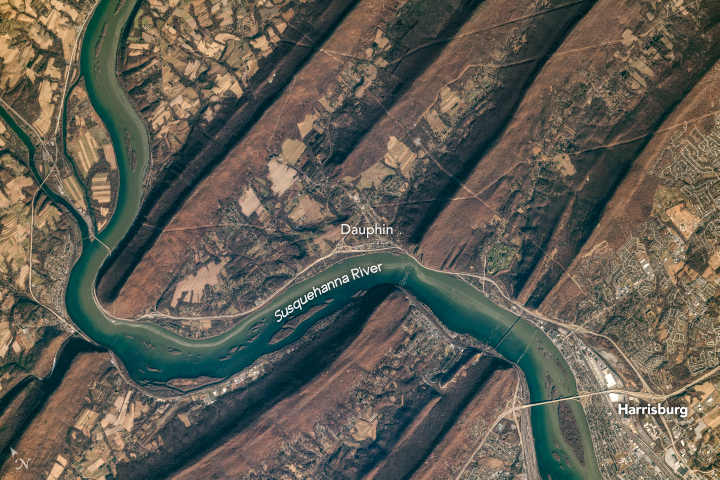 The Susquehanna River cuts through the folds of the Valley-and-Ridge province of the Appalachian Mountains in this photograph taken from the International Space Station by astronaut Christina Koch. Harrisburg, Pennsylvania, and a few smaller towns stand along the banks of the river.

The Valley-and-Ridge province is a section of the larger Appalachian Mountain Belt between the Appalachian Plateau and the Blue Ridge physiographic provinces. The northeast-southwest trending ridges are composed of Early Paleozoic sedimentary rocks. The valleys between them were made of softer rocks (limestone and shales) that were more susceptible to erosion; they are now occupied by farms. The Susquehanna River cuts through several ridges as it flows south.

The Susquehanna River flows 444 mi (714 kilometers) from upstate New York to Maryland, draining into Chesapeake Bay. The Susquehanna watershed covers more than 27,000 square miles (70,000 square kilometers) and is the source of more than half of the fresh water in the Bay. Farms like the ones in this photograph are a mainstay of Pennsylvania’s economy. However, they also contribute a large influx of nutrient and sediment pollution flowing into the Bay.

Astronaut photograph ISS061-E-98033 was acquired on December 24, 2019, with a Nikon D5 digital camera using an 800 millimeter lens and is provided by the ISS Crew Earth Observations Facility and the Earth Science and Remote Sensing Unit, Johnson Space Center. The image was taken by a member of the Expedition 61 crew. The image has been cropped and enhanced to improve contrast, and lens artifacts have been removed. The International Space Station Program supports the laboratory as part of the ISS National Lab to help astronauts take pictures of Earth that will be of the greatest value to scientists and the public, and to make those images freely available on the Internet. Additional images taken by astronauts and cosmonauts can be viewed at the NASA/JSC Gateway to Astronaut Photography of Earth. Caption by Laura Phoebus, Jacobs, JETS Contract at NASA-JSC.

The Susquehanna River cuts through the folds of the Valley-and-Ridge province of the mountain chain.