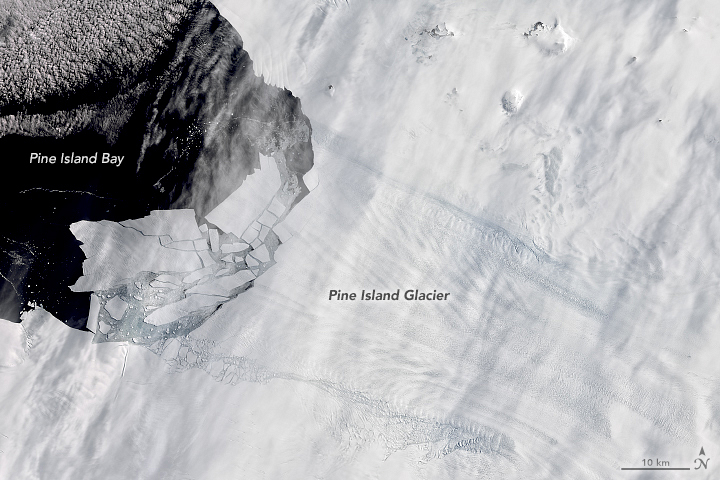 In a waiting game that spanned several months of 2019 and 2020, scientists watched cracks grow across the tongue of Antarctica’s Pine Island Glacier. It was always a matter of when, not if, the glacier would spawn a new iceberg. In this case, it spawned many.

The waiting ended on February 9, 2020, when radar images from the Sentinel-1 satellites showed numerous icebergs detaching from the glacier and floating in Pine Island Bay. The largest piece, Iceberg B-49, is about twice the size of Washington D.C. It is the only piece large enough to be named and tracked by the U.S. National Ice Center. 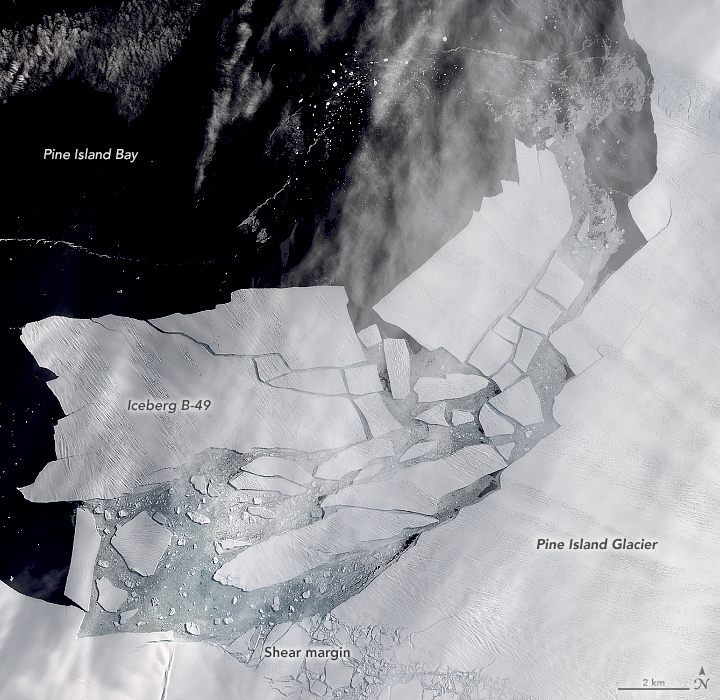 Through patchy cloud cover satellites captured some natural-color images, including the detailed views above, which were acquired on February 11, 2020, with the Operational Land Imager (OLI) on Landsat 8. Infrared data are superimposed on natural-color wavelengths to emphasize detail through areas of thin clouds.

In the past, large icebergs would break from Antarctica’s Pine Island Glacier every four to six years. Calving now occurs almost annually, and the bergs tend to more easily break up into smaller pieces. The fracturing indicates just how weak the thinning ice shelf has become, as relatively warm water in Pine Island Bay is partly melting it from below. Thinning of the floating ice tongue destabilizes the overall shelf by reducing the ice’s contact with underwater “pinning points” that slow ice flow and influence how the shelf calves.

The last major iceberg to break from Pine Island Glacier was B-46 in October 2018. Around that time, the main flow of the glacier lost contact with thicker ice from a tributary flowing from the southwest. As a result, Pine Island Glacier (PIG) lost ice at the front of its southwest shear margin—visible in these images as the crumbled ice between the edge of the fast flow of the glacier and the South Ice Shelf.

“When Pine Island Glacier lost contact with the thicker ice of the southwest tributary it was like the loss of protection on the glacier’s flank,” said NASA/UMBC glaciologist Christopher Shuman. “The growing indentation into the shear margin was likely a factor in the formation of all the rifts that then caused PIG’s ice to fall apart in the last calving. This area is likely to continue to breakdown as Pine Island Glacier pushes past the thinner South Ice Shelf, further exposing that flank.”

Pine Island Glacier, along with neighboring Thwaites Glacier, is one of the main pathways for ice entering the Amundsen Sea from the West Antarctic Ice Sheet. Pine Island is also one the fastest-retreating glaciers in Antarctica. It is a normal part of life for the floating ice from huge glaciers to fracture near the seaward edge and calve off as icebergs. If the icebergs break off at a rate that matches the glacier’s forward flow, the ice front stays in place. But the calving rate at Pine Island has increased more than the glacier has been able to move inland ice forward into Pine Island Bay.

The video above shows the long-term retreat of Pine Island Glacier’s ice front. Images were acquired by the Moderate Resolution Imaging Spectroradiometer (MODIS) on NASA’s Terra and Aqua satellites from 2000 to 2020. Notice that there are times when the front appears to stay in the same place or even advance, though the overall trend is toward retreat.

Iceberg B-49 calved from the Antarctic glacier in February 2020. 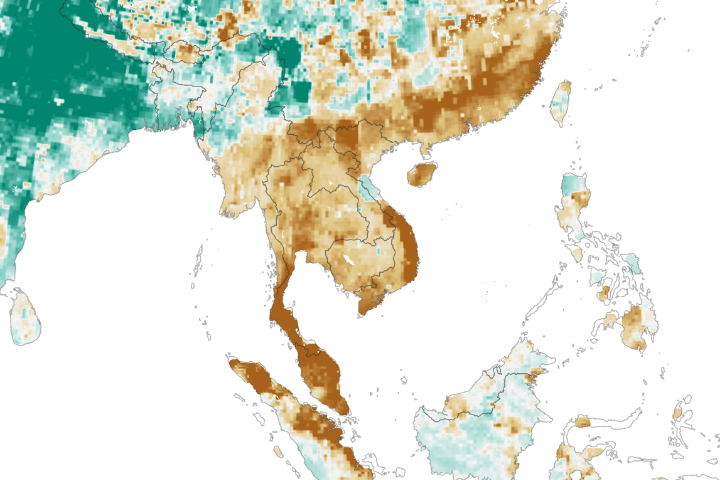 Landsat 8 captures a view of the ice separating from the ice shelf.