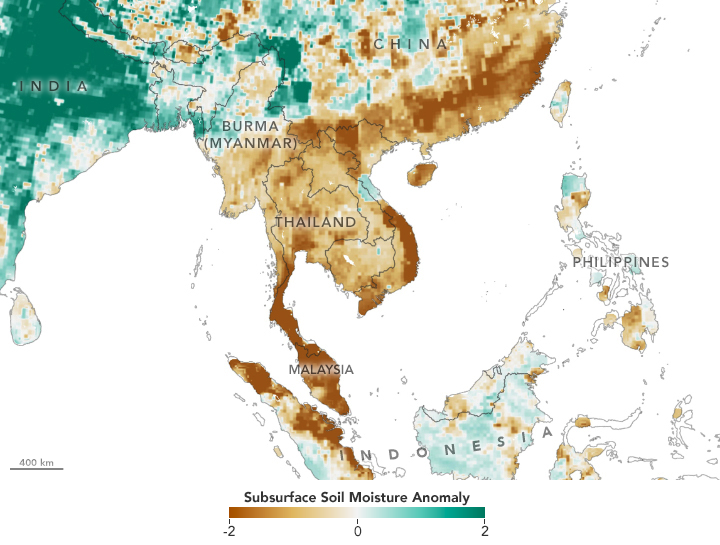 Thailand is experiencing its worst drought in possibly four decades. About half of the major reservoirs in the country stand below 50 percent of capacity. River levels are so low that saltwater from the ocean is creeping upstream and affecting drinking water supplies. And in a country where 11 million people work in farming, crop production and the economy are expected to suffer.

The drought conditions in Thailand were caused by a shorter-than-normal monsoon season and below-average annual rainfall in 2019. According to the Mekong River Commission (MRC), the monsoon rains arrived almost two weeks later and departed three weeks earlier in the Lower Mekong Basin, which includes Lao PDR (Laos), Thailand, Cambodia, and Vietnam. The MRC also stated an El Niño event created abnormally high temperatures and high evapotranspiration. Thailand was predicted to be affected particularly hard; the country is only two months into the dry season and reservoirs for irrigation and drinking are already low.

The map above shows soil moisture anomalies, or how much the water content near the land surface was above or below the norm for southeast Asia from January 1 to February 7, 2020. The measurements were derived from data collected by the Soil Moisture Active Passive (SMAP) mission, the first NASA satellite dedicated to measuring the water content of soils. SMAP’s radiometer can detect water in the top 5 centimeters (2 inches) of the ground. Scientists use that surface layer data in a hydrologic model to estimate how much water is present even deeper in the root zone, which is important for agriculture.

The drought has caused saltwater intrusion in some areas in Thailand’s water supplies, where water from the sea is encroaching up the river. There’s not enough fresh river water flowing down to the push saltwater away from cities, said Senaka Basnayake, the Director of Climate Resilience at the Asian Disaster Preparedness Center in Thailand.

“This is one of the signs showing the drought situation in low-lying areas in Thailand this year is worse than before,” said Basnayake, who is also a member of the SERVIR-Mekong team. SERVIR-Mekong is a joint project between NASA and United States Agency for International Development (USAID) that uses remote sensing to provide support for several areas in the Mekong River Basin, such as protection of food and water resources, disaster risk reduction, and sustainable development.

The SERVIR-Mekong team develops several drought-related products to generate drought and crop yield forecasts in the Mekong area. The information is used by the MRC to help provide accurate information for farmers trying to plan their water usage. According to the team’s Regional Drought and Crop Yield Information System, the drought severity in Thailand is above 90 percent across the country and could persist at that level until the end of March.

Thailand, one of the world’s leading sugar exporters, is expected to produce up to 30 percent less sugar compared to previous years, making this possibly the worst season in five years. On February 17, the Department of Royal Rainmaking and Agricultural Aviation (DRRAA) is expected to begin its annual relief plan, which includes filling local reservoirs.

Other countries in the Lower Mekong Basin are also expecting a severe dry season in the upcoming months. According to Vietnam’s Ministry of Agriculture and Rural Development, the Mekong Delta located in southwestern Vietnam received about 8 percent less precipitation during last year’s rainy season. Vietnam has already started to experience saltwater intrusion, which are damaging many rice fields in the Trá Vinh province. More than 10,000 hectares of winter-spring rice are experiencing a water shortage in the province. If water supplies continue to run low and saltwater intrusion continues, about 94,000 hectares of rice fields could be affected across the Mekong River Basin area.