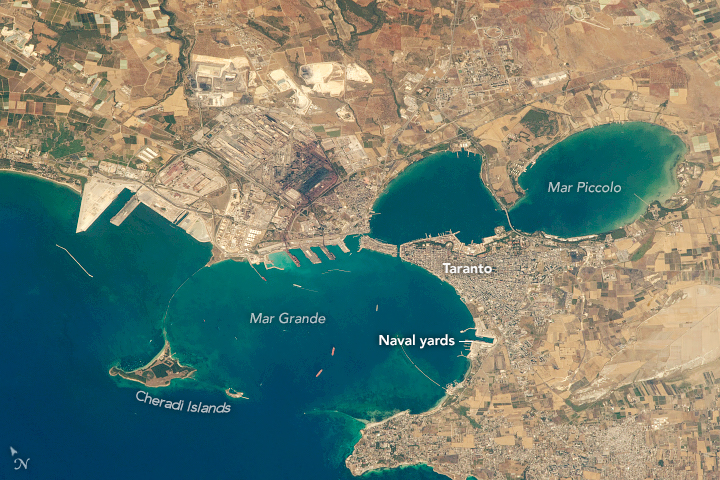 Looking down from the International Space Station on the Italian coastline through a powerful (1150 millimeter) zoom lens, an astronaut shot this detailed photograph of the city of Taranto. It is Italy’s major southern port and naval base. These facilities face into the outer bay, locally known as the Mar Grande, where ships are anchored. The Cheradi Islands form a small archipelago that encircles the Mar Grande.

From docks on the north side of Mar Grande, the city exports petroleum and steel products from a nearby industrial zone. The naval yards lie on the east side. The old town, dating from Roman times, occupies the tip of the promontory that separates Taranto’s outer bay from the inner bay, Mar Piccolo.

A wider view from 2014 shows Taranto’s location in the northern angle of the Gulf of Taranto.

Astronaut photograph ISS052-E-8449 was acquired on June 25, 2017, with a Nikon D4 digital camera using an 1150 millimeter lens and is provided by the ISS Crew Earth Observations Facility and the Earth Science and Remote Sensing Unit, Johnson Space Center. The image was taken by a member of the Expedition 52 crew. The image has been cropped and enhanced to improve contrast, and lens artifacts have been removed. The International Space Station Program supports the laboratory as part of the ISS National Lab to help astronauts take pictures of Earth that will be of the greatest value to scientists and the public, and to make those images freely available on the Internet. Additional images taken by astronauts and cosmonauts can be viewed at the NASA/JSC Gateway to Astronaut Photography of Earth. Caption by Justin Wilkinson, Texas State University, JETS Contract at NASA-JSC.

Italy’s major southern port and naval base has a history dating back to Roman times.

Seven Island Bay (left side of the image) is one of the largest and best-protected harbors on Quebec’s north shore of the Gulf of St. Lawrence. Because this is both a deep-water port and ice-free year round, Sept-Îles is one of Quebec’s busiest ports. Locally produced materials (iron ore, alumina) comprise the bulk of port traffic, but Sept-Îles also acts as a trans-shipment point for goods moving to Europe, the Far East, and South America.