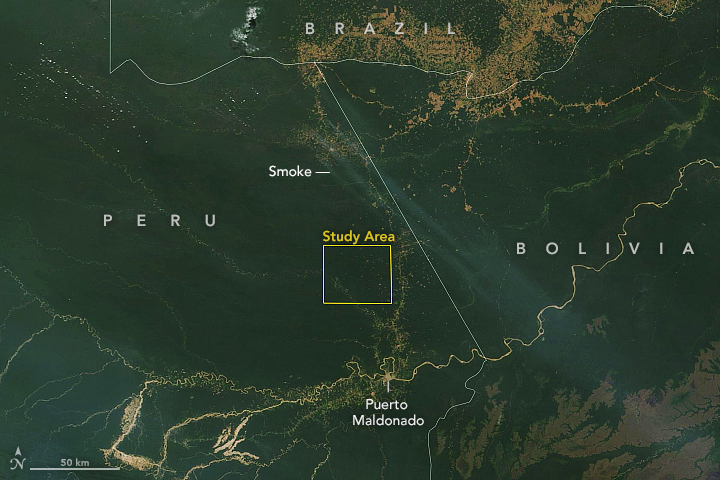 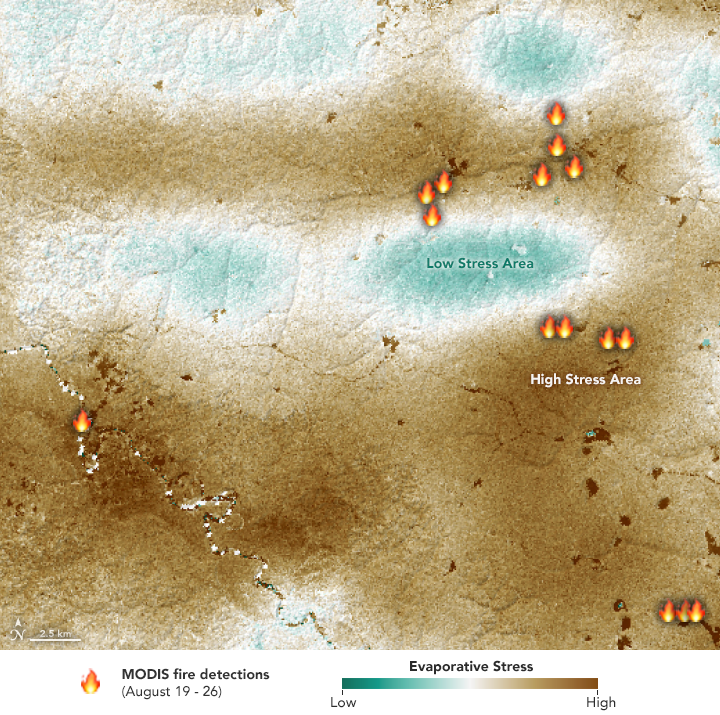 To the naked eye—and even to many satellite sensors—vegetation from the Amazon rainforest to Midwestern U.S. farms might look perfectly healthy. But thanks to a new remote sensing tool, scientists can detect stressed plants and trees before they show visible signs of trouble. Such data may one day help scientists predict areas that could be susceptible to forest or brush fires.

The tool is NASA’s ECOsystem Spaceborne Thermal Radiometer Experiment on Space Station, or ECOSTRESS. Mounted on the outside of the International Space Station, the instrument provides insight into the health of vegetation by essentially taking its temperature. To keep cool, plants “sweat” by releasing water vapor through their pores, a process called evapotranspiration. Using a radiometer to measure the thermal infrared energy emitted by plants, ECOSTRESS can measure how much they are transpiring and how they are responding to weather and climate stresses.

The image at the top shows a lush, green portion of the western Amazon rainforest as it appeared to the Moderate Resolution Imaging Spectroradiometer (MODIS) on NASA’s Terra satellite on August 18, 2019. The second map shows the evaporative stress in part of the region as measured by ECOSTRESS from August 19-26, 2019. Areas in shades of brown were water stressed; that is plants in those areas were releasing measurably less water vapor into the air—perhaps due to excess heat or too little precipitation. Fire symbols note places where MODIS detected the heat signatures of fire that week.

These ECOSTRESS observations indicate that some of the fires burning during the 2019 Amazon dry season were concentrated in water-stressed areas. Trees and other rainforest vegetation were struggling to stay cool and to conserve water, leaving them more vulnerable to the fires.

“To the naked eye, the fires appear randomly distributed throughout the forest,” said Josh Fisher, ECOSTRESS science lead at NASA’s Jet Propulsion Laboratory. “But if you overlay the ECOSTRESS data, you can see that the fires are mainly confined within the highly water-stressed areas. The fires avoided the low-stress areas where the forest appears to have access to more water.”

Fires in the Amazon Basin are mainly the result of human activities, such as deforestation for agricultural land clearing. The ECOSTRESS data reveals how certain parts of the forest were more resilient, seeming to protect themselves from burning. Plants in these areas were cooler—in other words, they released more water vapor from their leaves—than plants in the burn zones. However, Fisher and other mission scientists do not know whether that is a coincidence or a direct causal relationship.

It’s still a mystery why some plants become stressed while other plants do not, though scientists believe it is dependent on factors like the species of plant or amount of water in the soil. As the ECOSTRESS data archive grows, scientists should be better equipped to answer questions about which plants will thrive in their changing environments and how to better manage water and agricultural irrigation.