The Highest Settlement in the World 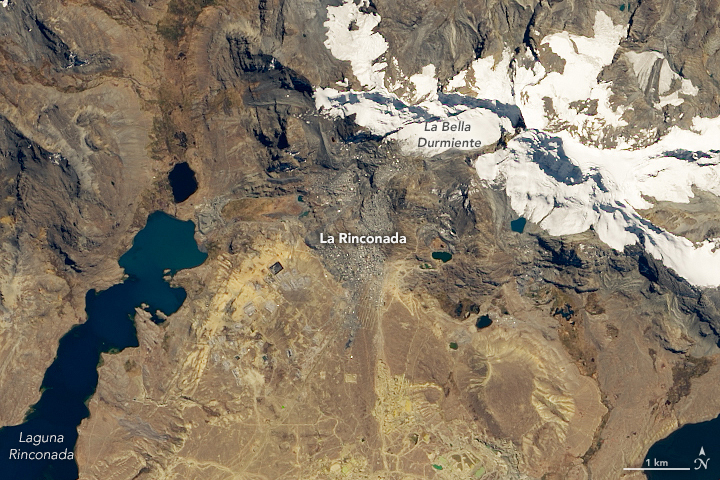 Tucked away in the eastern Andes Mountains, about 5,000 meters (3 miles) above sea level, the town of La Rinconada is the highest permanent settlement in the world. The Peruvian town does not have running water, a sewage system, or garbage disposal. Yet 50,000 people live here amidst the thin air for one valuable resource: gold.

The natural-color image above was acquired on August 1, 2019, by the Operational Land Imager on Landsat 8. La Rinconada lies in southeastern Peru, around 650 kilometers (400 miles) from the Bolivian border. The town is located on the side of Mount Ananea and below a giant glacier called La Bella Durmiente (meaning “Sleeping Beauty”).

The town started as a temporary mining settlement more than four decades ago, so no permanent city services (such as sanitation systems) were installed. Male miners were allowed to spend up to thirty days at a time in the mine to collect as much gold as they could. The miners received no wage while in the mine, but there were also no restrictions on how much gold they could haul out.

Despite the poor working and living conditions, the population boomed in the 2000s when the market price for gold increased. From 2000 to 2009, the population of La Rinconada reportedly increased by 230 percent. Electricity was finally installed in the 2000s. Residents either burn or bury their trash outside of city limits.

Besides the prospectors, the town also attracts researchers interested in studying the short-term and long-term effects of oxygen-poor conditions on humans. The thin air—each breath draws in half the amount of oxygen as at sea level—can lead to a syndrome called chronic mountain sickness (CMS). Symptoms of CMS include dizziness, headaches, ringing ears, palpitations, and even heart failure and death. Researchers estimate one in four people in La Rinconada suffer from CMS.

There is no running water, no sewage system, and no garbage disposal, but La Rinconada has one resource worth its weight.