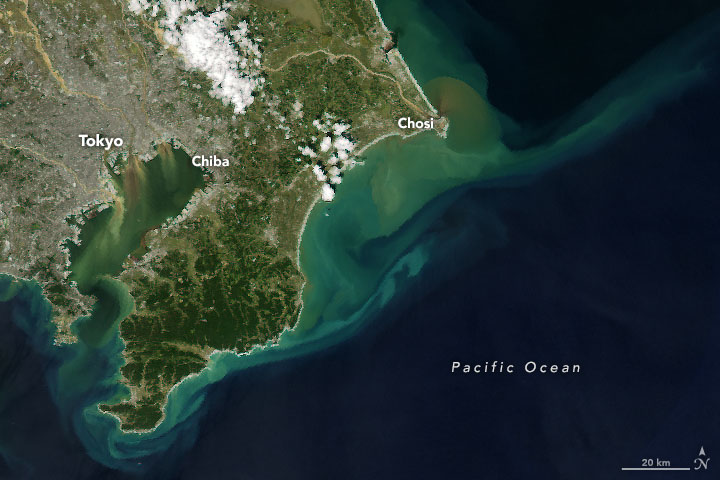 After forming in the Philippine Sea and rapidly intensifying into a powerful category 5 storm on October 5, 2019, super typhoon Hagibis gradually weakened as it approached Japan. Yet when the category 2 storm made landfall on the Izu Peninsula on October 12, its broad wind field and record-breaking rain devastated the island of Honshu. The storm caused widespread flooding, mudslides, power outages, and wind damage.

The Moderate Resolution Imaging Spectroradiometer (MODIS) on NASA’s Aqua satellite captured this natural-color image of Honshu on October 13, 2019, after the last of the storm’s clouds had moved to the northeast. Rivers and coastal waters that normally appear blue were instead brown with sediment knocked loose and washed away by the rush of rainfall. Large plumes of sediment-rich water rushed into several bays along Honshu’s east coast, where it mixed and swirled with seawater.

While typhoons regularly hit Japan, meteorologists say Hagibis was particularly damaging because of the angle of its attack and where it made landfall. Storms usually strike southern Japan first and weaken rapidly by the time they reach Tokyo and other population centers in central Honshu. In this case, the storm stayed offshore until making landfall just 130 kilometers (80 miles) southwest of Tokyo. That allowed Hagibis to draw energy from the sea longer than most storms do. When it made landfall, the storm was also interacting with higher level winds in the jet stream, which spread the strongest winds over a larger area than usual.

According to press reports, Hagibis caused dozens of deaths, hundreds of injuries, flood damage to at least 10,000 homes, and power outages in many more. River embankments collapsed in at least 66 places on 47 different rivers and streams. One of the areas hardest hit by rain was Hakone, which received 922.5 millimeters (36.3 inches) of rain fall in just one day.