Rifting and Calving on the Amery Ice Shelf

The last time a major iceberg calved from East Antarctica’s Amery Ice Shelf, there were no satellites poised to document the event. Scientists in the 1960s relied on aircraft, ships, and land-based studies to survey the ice shelf and its progeny. Now, more than half a century later, satellites have captured riveting space-based views as another huge berg has broken away from the shelf.

The animation above, composed of images from the Moderate Resolution Imaging Spectroradiometer (MODIS) instruments on NASA’s Aqua and Terra satellites, shows the iceberg on six relatively cloud-free days between September 13 and October 2, 2019. The iceberg, named D-28, measures 632 square miles (1636 square kilometers). For comparison, that’s about the same area spanned by the city of Houston.

For ice shelves and glaciers that reach the ocean, calving is part of the natural cycle of advance and retreat. Compared to melting, the fastest way for glaciers to lose mass to the ocean is through rifting and the subsequent calving of icebergs. But there are still plenty of unknowns about how ice shelves and icebergs work. How do factors like waves, winds, melting from the shelf’s underside, and even the structure of the ice, contribute to a calving event?

Scientists working to answer these questions face a basic challenge: calving events are hard to observe. They happen infrequently and in remote locations. And if you try to make observations from the surface, there’s the hazard of getting too close to an event with such explosive energy.

NASA snow and ice scientist Catherine Walker, and colleagues Helen Fricker (Scripps/UCSD) and Jeremy Bassis (University of Michigan), have taken another approach. They use satellite data to study the large systems of rifts that propagate across ice shelves as a precursor to calving. Over the past 20 years, rifts at Amery have been the most active—growing faster and more continuously than any other ice shelf around Antarctica. 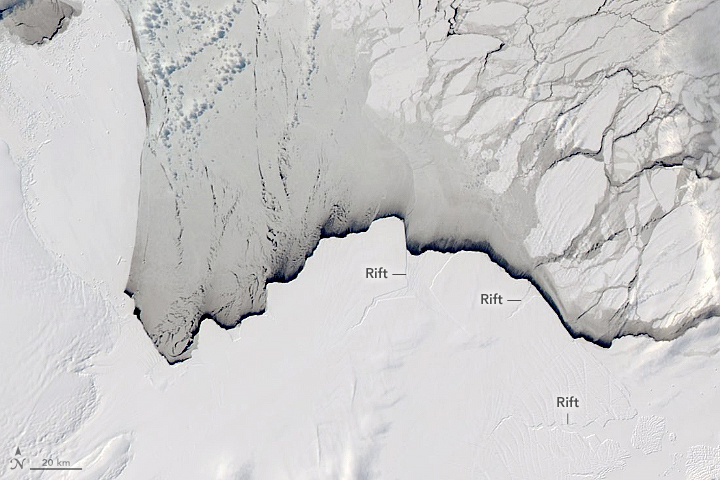 Walker, Fricker, and Bassis originally focused on an area of ice called the “loose tooth.” You can see this segment in the September 13 image above; it appears to have a tenuous connection to the shelf, given its location between two large rifts. But the scientists eventually moved their attention west of the “loose tooth,” where one of the rifts had picked up speed. They described their findings in a 2015 paper in the Journal of Glaciology.

“So, we thought, maybe this side will go first,” Walker said, which is exactly what happened when D-28 broke away. “It’s still quite surprising how fast it went, though; the three of us have been looking at it often—most recently in April 2019—and we didn’t foresee that it would be gone by October.”

The latest calving event provides more observations for the researchers to study. Analysis of D-28, combined with continued monitoring of the rifts, could help them better understand the factors leading to the creation of new icebergs, as well as what happens afterwards.

“East Antarctica is a place often thought to be pretty stable and less affected by warming ocean and atmosphere trends,” Walker said. “It will be interesting to compare calving events and see what this latest event tells us, and how that might be informative of what’s starting to happen in East Antarctica.”

The ice shelf in East Antarctica has spawned its first major iceberg in more than half a century.