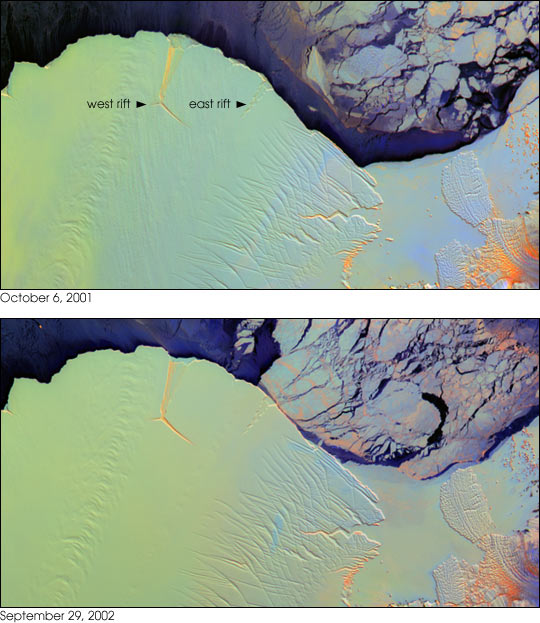 The Amery Ice Shelf is an important dynamic system responsible for draining about 16 percent of the grounded East Antarctic ice sheet through only 2 percent of its coastline. Most of the mass input to the system occurs from the Lambert Glacier and several other glaciers. Mass loss from the system occurs through basal melting and iceberg calving. These images from the Multi-angle Imaging SpectroRadiometer (MISR) portray the ice shelf front on October 6, 2001 (top), and September 29, 2002 (bottom), and illustrate changes that took place over the year elapsed between the two views.

Two longitudinal rifts, oriented roughly parallel to the direction of ice flow and measuring about 25 and 15 kilometers in length, are apparent near the seaward edge of the ice shelf. Between them, a transverse fracture extends eastward from the base of the western rift. This rift system is colloquially named the Amery “loose tooth.” Over the course of the one-year interval between these two MISR images, the ice front has advanced approximately 1.6 - 1.7 kilometers, and the transverse fracture and a three-way fissure at the juncture of the rifts have widened. When the transverse fracture eventually reaches the eastern rift, a large iceberg (25 kilometers x 25 kilometers) will be released.

Understanding the “normal” frequency of calving events from a particular ice shelf is necessary before it can be determined whether calving rates are changing. As part of an effort to determine the normal rate of ice flow and iceberg calving events, the Amery Ice Shelf front has been monitored by various remote-sensing instruments for many years. The Amery Ice Shelf is currently considered to be about two-thirds of the way through a calving cycle. The last major calving event occurred in the early 1960s, when a massive iceberg (measuring about 140 kilometers x 70 kilometers) was released.

The Amery “loose tooth” is the subject of a joint field experiment during the 2002 austral summer, partially funded by NASA and undertaken by the Scripps Institution of Oceanography and the Australian Antarctic Division. The Multi-angle Imaging SpectroRadiometer observes the daylit Earth continuously from pole to pole, and every nine days views the entire globe between 82 degrees north and 82 degrees south latitude. The MISR Browse Image Viewer provides access to low-resolution true-color versions of these images. These data products were generated from a portion of the imagery acquired during Terra orbits 9579 and 14807. The panels cover an area of about 204 kilometers x 110 kilometers, and utilize data from blocks 146 to 147 within World Reference System-2 paths 127 and 128, respectively. Data from the two orbital paths have been remapped to identical polar projections, and were cropped to include the same geographic area.