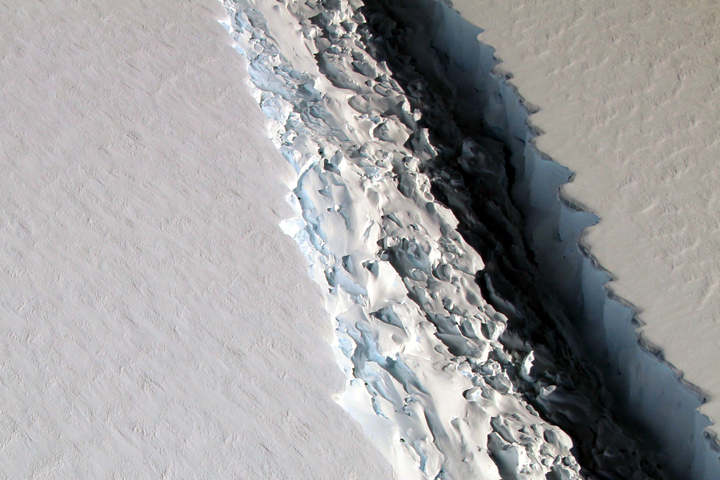 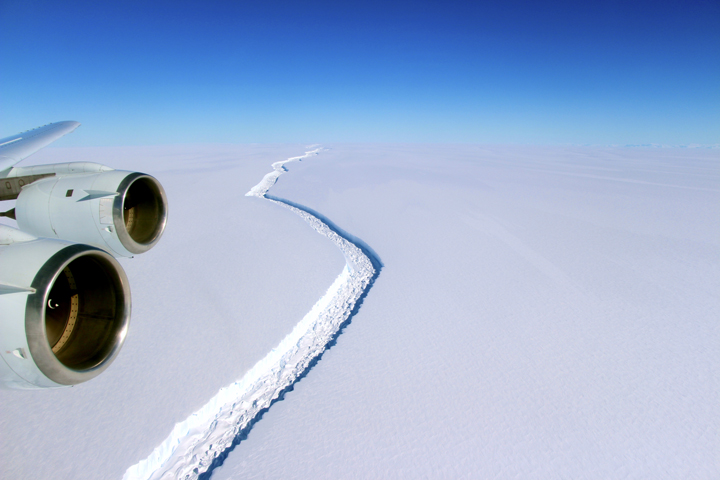 In late August 2016, sunlight returned to the Antarctic Peninsula and unveiled a rift across the Larsen C Ice Shelf that had grown longer and deeper over the austral winter. Satellites spotted it in natural-color imagery. By November, the arrival of longer days and favorable weather made it possible for scientists to take a closer look.

These photographs show close and wide views of the rift from the vantage point of NASA’s DC-8 research aircraft. NASA scientist John Sonntag snapped the photos on November 10, 2016, during an Operation IceBridge flight. The mission, which makes airborne surveys of changes in polar ice, completed its eighth consecutive Antarctic deployment later that month.

The rift in Larsen C measures about 100 meters (300 feet) wide and cuts about half a kilometer (one-third of a mile) deep—completely through to the bottom of the ice shelf. While the rift is long and growing longer, it does not yet reach across the entire shelf. When that happens, Larsen C will shed an iceberg about the size of Delaware.

Cracks and calving of ice from the front of an ice shelf are normal. Shelves are fed by glaciers and ice streams coming from the interior of the continent. They advance into the ocean until a calving event takes place. The shelf front retreats and then advances again. The whole cycle can occur over the span of a few decades.

But calving that happens faster than a shelf can re-advance can mean trouble for an ice shelf. For example, large and frequent calving events at Larsen B preceded that shelf’s final period of rapid disintegration, which occurred in just six weeks in 2002. Whether Larsen C will respond in a similar way remains to be seen, but that’s one reason why scientists plan to make observations before and after the next calving event.

Ice shelves float, so they do not directly contribute to sea level rise. They are important, however, because they buttress land ice and keep it inland. If a shelf disintegrates, glaciers that feed it can flow more quickly out to sea—a process that directly increases sea level.