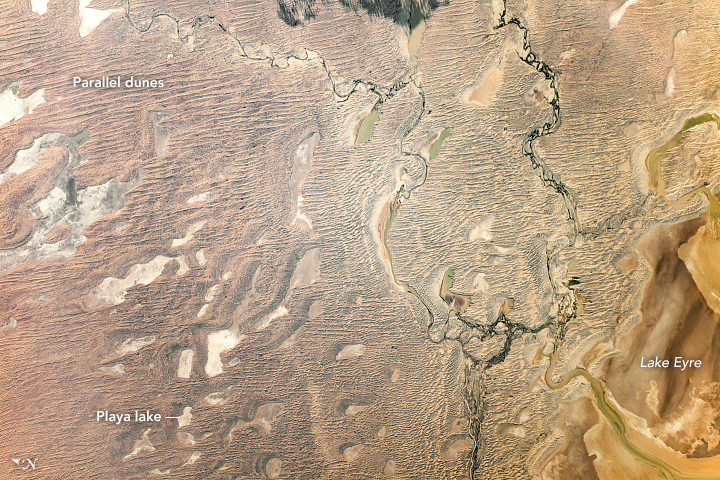 This photograph, taken by an astronaut on the International Space Station, offers a detailed view of parallel, linear dunes in Australia’s Simpson Desert. The dunes have formed as a result of wind erosion and sand deposition taking place over thousands of years. Some of the dunes stretch more than 100 kilometers (60 miles) in length.

Lake Eyre—also known as Kati Thanda–Lake Eyre—is Australia’s largest salt lake. Some of it is visible in the right corner of the image, along with other playa lakes that stand out from the rippled landscape. Playas are flat, shallow lake beds that occur in arid and semi-arid climate zones. The dry lake beds are lighter in color due to a thin layer of salt deposits that reflect more light.

The Kati Thanda-Lake Eyre basin spans parts of South Australia, Northern Territory, Queensland, and New South Wales. It is part of one of the world’s largest internally draining river systems, which means that the rivers in the photo do not drain into the ocean. In this photo, Lake Eyre has a higher volume of water than usual due to flooding that occurred earlier in the year.

Astronaut photograph ISS059-E-67912 was acquired on May 19, 2019, with a Nikon D5 digital camera using a 210 millimeter lens and is provided by the ISS Crew Earth Observations Facility and the Earth Science and Remote Sensing Unit, Johnson Space Center. The image was taken by a member of the Expedition 59 crew. The image has been cropped and enhanced to improve contrast, and lens artifacts have been removed. The International Space Station Program supports the laboratory as part of the ISS National Lab to help astronauts take pictures of Earth that will be of the greatest value to scientists and the public, and to make those images freely available on the Internet. Additional images taken by astronauts and cosmonauts can be viewed at the NASA/JSC Gateway to Astronaut Photography of Earth. Caption by Laura Phoebus, Jacobs Technology, JETS Contract at NASA-JSC.