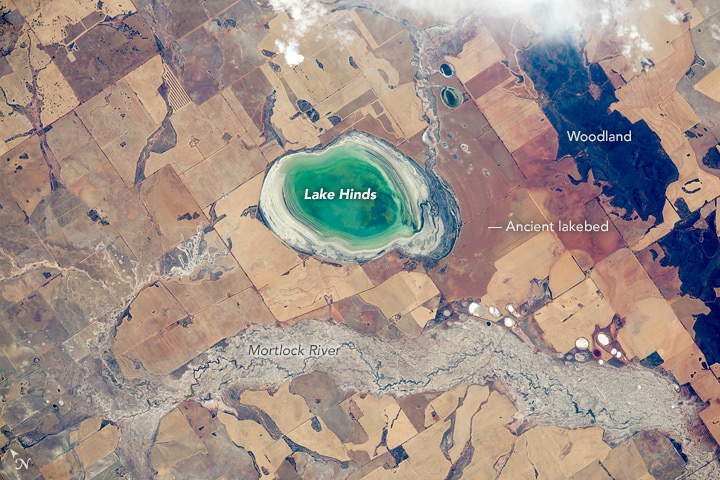 Using a powerful lens, an astronaut aboard the International Space Station photographed this small but eye-catching dry lake not far from Perth, Australia. The modern lake floor is only 5 kilometers in length and it is usually dry, with an exposed bed of white salt. But green water in this view indicates that recent rains had partly filled the lake. In this increasingly arid inland sector of the wheat belt, the Mortlock River carries more dissolved salt than other rivers in the area.

Smooth-edged, dry lake beds are well-known features of the landscape in Australia. Numerous “bath-tub rings” show the prior water levels in the lake. It was once much larger, as shown by another series of parallel, hard-to-detect rings east of the lake. Today this ancient lake floor is among the most fertile agricultural parcels in the area.

Most of Australia is arid or semi-arid, such that agriculture is mostly limited to the continent’s wet margins. In this slightly wetter, southwest region around Perth, rectangular wheat fields (aligned north-south) are densely packed. Not very far to the east, all agriculture stops and large sheep ranches dominate the land use. The hilly country of Mount Matilda and Mount O’Brien remain wooded because they are too rough to plough.

Astronaut photograph ISS045-E-167797 was acquired on December 3, 2015, with a Nikon D4 digital camera using an 800 millimeter lens, and is provided by the ISS Crew Earth Observations Facility and the Earth Science and Remote Sensing Unit, Johnson Space Center. The image was taken by a member of the Expedition 45 crew. The image has been cropped and enhanced to improve contrast, and lens artifacts have been removed. The International Space Station Program supports the laboratory as part of the ISS National Lab to help astronauts take pictures of Earth that will be of the greatest value to scientists and the public, and to make those images freely available on the Internet. Additional images taken by astronauts and cosmonauts can be viewed at the NASA/JSC Gateway to Astronaut Photography of Earth. Caption by M. Justin Wilkinson, Texas State U., Jacobs Contract at NASA-JSC.