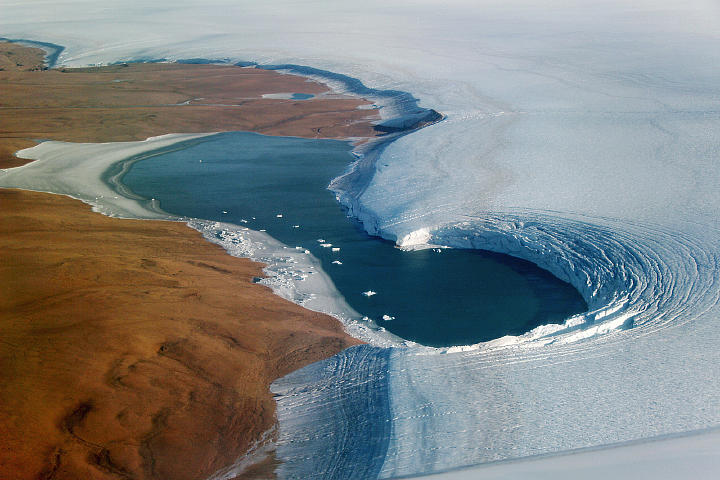 For a brief period in late summer, Greenland takes on an appearance like no other time of year. Months of relative warmth culminate in vast areas of the landscape showing signs of melting. For example, water can pond on the surface of the ice, or show up along the edges of glaciers. The latter is visible in this image, which shows a so-called proglacial lake in northwest Greenland.

This lake is bounded to the right by Humboldt Glacier—Greenland’s widest marine-terminating glacier. On the left is Washington Land, a deglaciated peninsula that juts into the Kane Basin. Without a blanket of winter snow, the red-brown land appears to glow in the sunlight.

John Sonntag, a scientist at NASA’s Goddard Space Flight Center, shot this photograph on September 4, 2019, during an airborne campaign for NASA’s Operation IceBridge. The flight was one of 11 flown this month on NASA’s Gulfstream-V to measure summer melting on Greenland. The measurements will be compared to those collected during the IceBridge campaign in spring 2019, and with measurements from the new Ice, Cloud and land Elevation Satellite-2 (ICESat-2), which launched one year ago.

“We get to observe the ice surface along the margin without last winter’s snowfall on top, as is usually the case during our spring campaigns,” wrote IceBridge project scientist Joe MacGregor. “That’s both scientifically valuable and—admittedly—often more visually compelling.”

There is more to the image than just a pretty lake. Notice the brown bands running through the ice. The various colors are distinct layers of ice deposited during different climate periods. The layers have become exposed along the edge as ice has been lost, through processes such as melting, evaporation, and wind. Scientists can use such patterns to estimate the age of the various layers—similar to the way scientists estimate age from the layers in an ice core.