A Potent Cold Snap for Australia 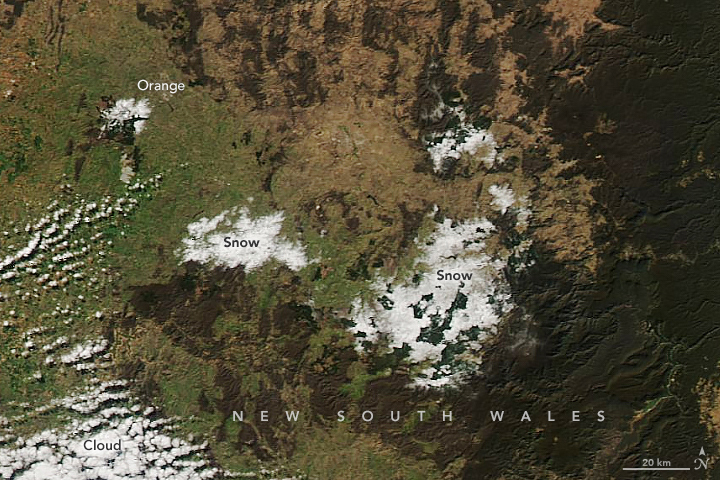 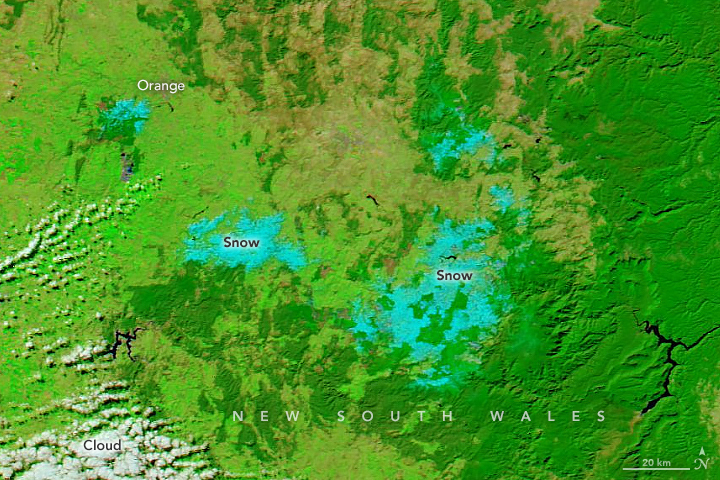 While much of the northern hemisphere has been baking and burning this summer, southeastern Australia just endured a potent blast of winter weather that brought rare snow and fierce winds. A succession of cold air masses blew in from Antarctica between August 9-12, 2019, leading to icy roads and measurable snowfall across parts of New South Wales, Victoria, and Queensland.

The Moderate Resolution Imaging Spectroradiometer (MODIS) on NASA’s Aqua satellite acquired these views of lingering snow in New South Wales in the afternoon on August 13, 2019. The first (left) image is natural color, while the second uses a combination of visible and infrared light (MODIS bands 7-2-1) to distinguish snow and ice (teal) from clouds (white).

The interior town of Orange accumulated 25 centimeters (10 inches) of snow over the weekend, while nearby Lyndhurst saw 40 centimeters (16 inches). Much of the snow in the region was concentrated at high elevations (above 1000 meters) in the Blue Mountains and the Dandenong Range. But snow also fell on lower elevations (below 300 meters) in Tumut and Maldon. Wind gusts reached 90 to 100 kilometers (55 to 60 miles) per hour in some parts of southeastern Australia.

Australian climate and atmospheric scientists writing for The Conversation noted that the August 9-12 weather event was one of the longest cold stretches and greatest snowfall totals in the 2000s. Snow falls on the mountains almost every year in Australia, but only rarely does it spread down onto the plains and cities.

The snow brought some troubles and some smiles. Roads were closed in many locations due to slippery, icy conditions; flights were canceled at several airports; livestock losses (particularly sheep) were reported from several farms; and as many as 10,000 homes lost power for a bit. On the other hand, an Australian football match was played in snowy conditions in Canberra for the first time in memory. Farmers welcomed the snow blanket as it allows more moisture to seep into the soil than rain (which often runs off). And some kangaroos became social media stars for hopping playfully through snowy fields.

A succession of cold air masses blew in from Antarctica, leading to icy roads and measurable snowfall across parts of New South Wales, Victoria, and Queensland.