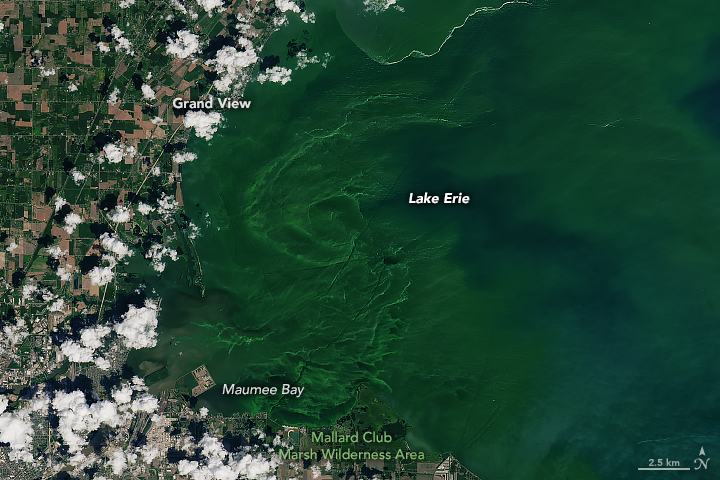 In July 2019, a severe bloom of blue-green algae began spreading across the western half of Lake Erie. The dominant organism—a Microcystis cyanobacteria—produces the toxin microcystin, which can cause liver damage, numbness, dizziness, and vomiting. On July 29, the National Oceanic Atmospheric Administration (NOAA) reported unsafe toxin concentrations in Lake Erie and have since advised people (and their pets) to stay away from areas where scum is forming on the water surface.

This image shows the bloom on July 30, 2019, as observed by the Operational Land Imager on the Landsat 8 satellite. Green patches show where the bloom was most dense and where toxicity levels were unsafe for recreational activities. Around the time of this image, the bloom covered about 300 square miles of Lake Erie’s surface, according to news reports; by August 13, the algae had spread across 620 square miles.

While blooms in Lake Erie are a regular occurrence in the summer, NOAA researchers forecasted that 2019 could bring some of the most abundant blooms in recent years.

Bloom conditions this year were influenced by calm winds and rainfall. Calm winds in July allowed algal toxins to accumulate at the surface (instead of being dispersed). Strong winds in August have since mixed some surface algae to deeper depths. Heavy rains carry excess nutrients (often fertilizer) from farms into the lake. However, such nutrient runoff may have been less than anticipated this year because heavy spring rains and flooding prevented many farmers from planting crops.

NOAA researchers will continue to monitor the bloom, producing weekly bulletins of the location and concentration of algae growth and predictions about where it is headed. The team integrates several data sets, including NASA’s MODIS-derived cyanobacteria index, NOAA water temperature measurements, and wind conditions. NOAA will also collect and process water samples with an unmanned underwater vehicle. 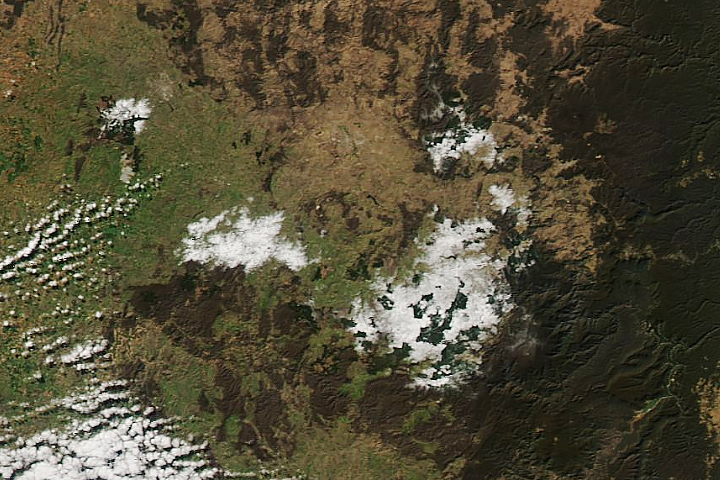