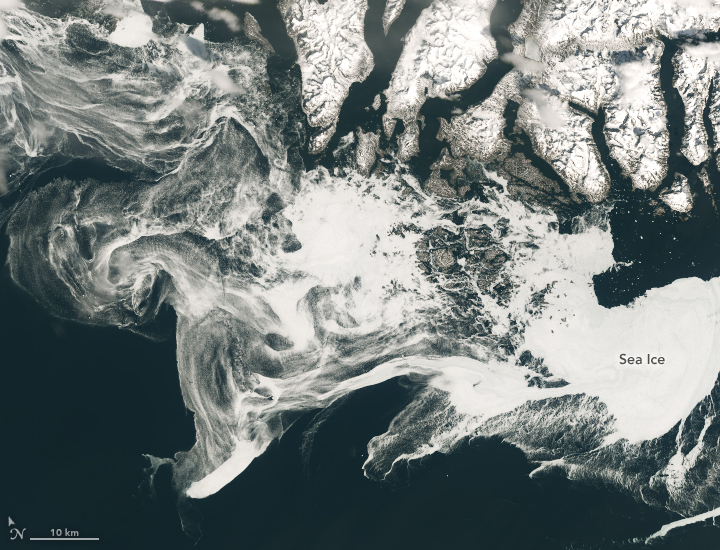 When Arctic sea ice reaches its maximum extent each spring, as it did in March 2019, Greenland’s coastline is almost entirely encased in frozen seawater. The exception is an area off of southern Greenland, where water temperatures, circulation, and air temperatures combine to keep the water ice-free for most of the year.

Still, there are days when conditions are just right and sea ice can survive here. That was the case on May 6, 2019, when the Operational Land Imager (OLI) on Landsat 8 acquired this natural-color image. It shows ice in the Labrador Sea off the island’s southern tip, near the Kitsissut Islands.

“It is a beautiful image, illustrating the gorgeousness of our planet,” said Claire Parkinson, climate scientist and sea ice expert at NASA’s Goddard Space Flight Center. “Winds and waves and currents can result in all sorts of beautiful, ever-changing patterns in the sea ice cover.”

According to Walt Meier, an ice scientist at the National Snow and Ice Data Center, the whitest areas are where the ice is consolidated and relatively thick—possibly up to 0.5 meters thick. The grayer filaments are newer, thinner ice—likely just 20 centimeters or less—that have been stretched out by the winds and currents into patterns that look like clouds. “If you could zoom in down the surface,” Meier said, “you would see nilas (thin sheets of ice) or pancake ice (small round ice floes) interspersed with unfrozen water.”

One reason why sea ice struggles to grow here is because of the region’s currents. Along Greenland’s eastern coast, sea ice flows southward on a cold current. But as the ice begins to round the southern tip, it encounters the warmer waters of the Irminger Current and promptly melts. Summertime has the extra complication of warm air temperatures. And in winter, the water is too unstable for ice to form, as cold water sinks here and is replaced by warm, saltier water.

In springtime, however, meltwater from East Greenland can move in and make surface waters colder, fresher, and stable enough for ice to form on the surface—at least on days when the air temperature is still cold enough. “I think this is where weather variability comes into play,“ Meier said. “You need some warm temps to melt and freshen the ocean surface, but then you need a cold snap to drop temperatures enough for sea ice to start forming.”