A Wide View of Luzon 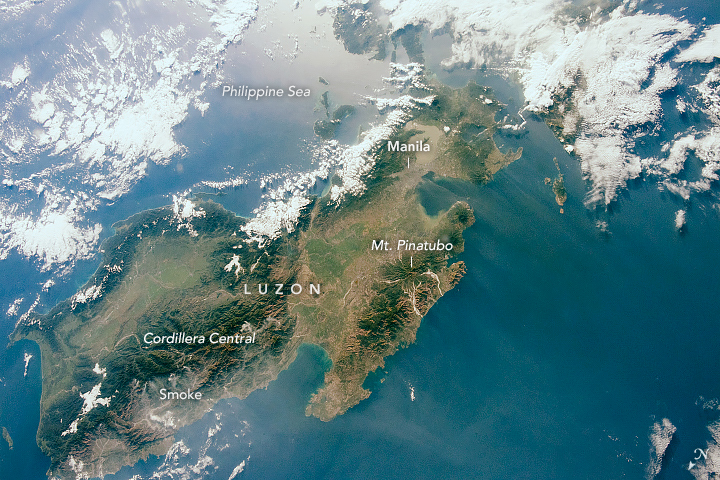 An astronaut onboard the International Space Station took this photograph of Luzon, the largest island in the Philippines. The Republic of the Philippines is comprised of thousands of islands. Most of the country’s population (about 100 million people) live on just eleven of those islands, with more than half living on Luzon.

Mountain ranges and valleys trend north-south across the island. (Note that north is to the lower left in this photo.) The Cordillera Central is Luzon’s tallest and longest range, with broad river valleys on either side.

Mount Pinatubo is one of many volcanoes making up the Zambales Volcanic Range in western Luzon. Lahars from Pinatubo’s famous 1991 eruption extend down in a pinwheel-like pattern from the volcano’s peak. Subduction zones located on either side of the Philippine island chain put large populations of people at risk from earthquakes and volcanic hazards. The islands are also battered by typhoons nearly every year.

In the photo, smoke is blowing west (to the right in this view) off the Cordillera Central. Thermal anomalies detected by the Suomi NPP satellite indicate the presence of fires nearby. According to government sources, most of the fires in the Cordillera can be attributed to slash-and-burn farming, as well as other human causes.

Astronaut photograph ISS058-E-13490 was acquired on February 14, 2019, with a Nikon D5 digital camera using a 24 millimeter lens and is provided by the ISS Crew Earth Observations Facility and the Earth Science and Remote Sensing Unit, Johnson Space Center. The image was taken by a member of the Expedition 58 crew. The image has been cropped and enhanced to improve contrast, and lens artifacts have been removed. The International Space Station Program supports the laboratory as part of the ISS National Lab to help astronauts take pictures of Earth that will be of the greatest value to scientists and the public, and to make those images freely available on the Internet. Additional images taken by astronauts and cosmonauts can be viewed at the NASA/JSC Gateway to Astronaut Photography of Earth. Caption by Andrea Meado, Jacobs Technology, JETS Contract at NASA-JSC.

Astronauts caught a rare, mostly clear glimpse of the largest island in the Philippines.