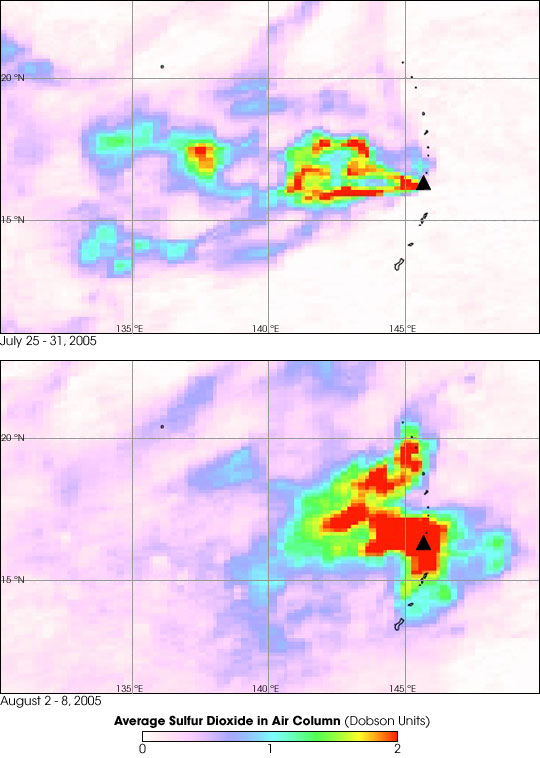 As reported by the Saipan Tribune Website, the Anatan Volcano spewed volcanic ash to an altitude of nearly 13,000 meters (42,000 feet) in early August, prompting officials to issue a volcanic ash advisory for Saipan and Tinian in the Northern Mariana Islands. The volcano has emitted something besides ash: sulfur dioxide.

Sulfur dioxide is colorless, so its presence must be monitored with sensors specially designed to find it. The Ozone Monitoring Instrument (OMI) on NASA’s Aura satellite collects data on atmospheric chemistry. OMI monitors sulfur dioxide emissions from Anatahan, and collected data shown in these images between July 25 and 31 (top), and August 2 and 8 (bottom). Highest concentrations appear in red, and lowest concentrations appear in pale pink. In each image, the arrow indicates the volcano’s summit. OMI measures sulfur dioxide in terms of molecules per square centimeter of atmosphere, known as Dobson Units. A single Dobson Unit equals 0.0285 grams of sulfur dioxide per square meter of vertical column of atmosphere.

The images show different dispersion patters for sulfur dioxide in late July and early August. Between July 25 and 31, predominantly easterly winds carried the noxious emissions away from the populated islands. Between August 2 and 8, however, changing winds allowed sulfur dioxide to accumulate over the Southern Mariana Islands and Guam.