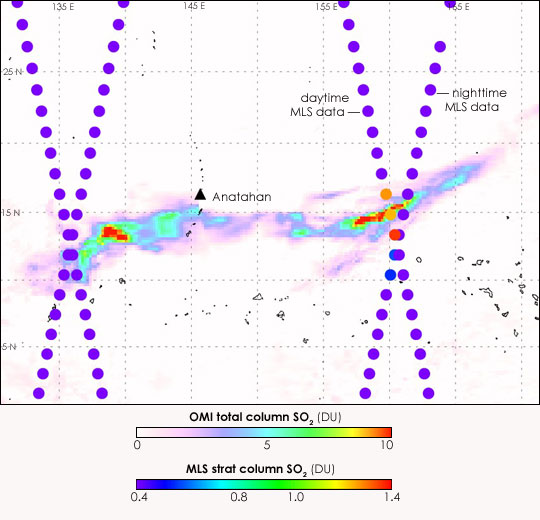 Explosive volcanic eruptions inject gases and ash into the Earth’s atmosphere, creating hazardous conditions for passing aircraft and the potential for climate effects. By the end of April 2005, two largest explosive eruptions had occurred at Manam (Papua New Guinea) on January 27-28, 2005, and at Anatahan (Mariana Islands) on April 5-6, 2005. These eruptions were of similar magnitude and both occurred on small islands causing major damage and evacuations on Manam island (which is inhabited) and concern over ashfall on islands south of Anatahan (which is uninhabited), respectively.

The above image of Anatahan shows sulfur dioxide concentrations in the atmosphere on April 7, 2005, over 30 hours after the eruption. Sulfur dioxide (SO2) emissions from the eruption were measured by the Ozone Monitoring Instrument (OMI) on NASA’s EOS/Aura satellite. OMI detects the total column amount of SO2 between the sensor and the Earth’s surface and maps this quantity as it orbits the planet. A new perspective on the vertical distribution of the SO2 is revealed by combining the OMI data with coincident measurements made by the Microwave Limb Sounder (MLS), also part of the Aura mission.

The MLS data crisscross the OMI image and clearly show that some, but not all, of the SO2 measured by OMI east of the volcano was in the upper troposphere or above. At these altitudes, sulfur dioxide—and the sulfate aerosols that form from it—can stay in the atmosphere and affect the climate for a longer period of time. A weaker SO2 signal was also measured in the same region during the nighttime MLS overpass, which crosses the image from upper right to lower left. The daytime data, running from upper left to lower right, coincide with the OMI measurements. The MLS data west of Anatahan show no significant SO2 signal, indicating that the SO2 measured by OMI in this region was in the lower troposphere.

MLS measures thermal emissions from the Earth’s limb, so unlike the OMI sensor it also collects data at night. It is designed to measure vertical profiles of atmospheric gases that are important for studying the Earth’s ozone layer, climate, and air quality, such as SO2. These images, derived from preliminary, unvalidated OMI and MLS data, show MLS SO2 columns (filled circles) measured every 165 km along the Aura orbit, plotted over the OMI SO2 map. The MLS SO2 columns shown here are derived from profile measurements made from the upper troposphere into the stratosphere (~215 – 0 hPa or ~12 km altitude and above), and the circles do not represent the actual size of the MLS footprint, which is roughly 165 kilometers by 6 kilometers.

The Manam image from January 28, 2005, shows larger SO2 amounts measured by MLS and OMI, though these data were collected only approximately 14 hours after the eruption on January 27-28. For both eruptions, peak SO2 amounts were measured by MLS at or just above the likely tropopause altitude, at the lowermost boundary of the stratosphere.

Sulfate particles (aerosols) that form from sulfur gases in the stratosphere have a cooling effect on the Earth’s surface. The principal source of sulfate particles is large explosive volcanic eruptions, and the remaining sulfates in the atmosphere are believed to come from carbonyl sulfide, a gas emitted from marshes, soils, forests, and some industrial processes. Recent studies suggest, however, that there must be some other source of sulfates in the stratosphere; carbonyl sulfide concentrations are too small to account for observed sulfates. Could smaller, but more frequent volcanic eruptions, such as those at Anatahan and Manam, be contributing to this “excess” background sulfate aerosol? OMI offers much improved spatial resolution and sensitivity to SO2 compared to its predecessor, the Total Ozone Mapping Spectrometer (TOMS), and Aura’s MLS is a major technological advance over the older MLS flown on the Upper Atmosphere Research Satellite (UARS) since 1991. The Aura mission will therefore allow scientists to investigate the source of sulfate aerosols in far greater detail.