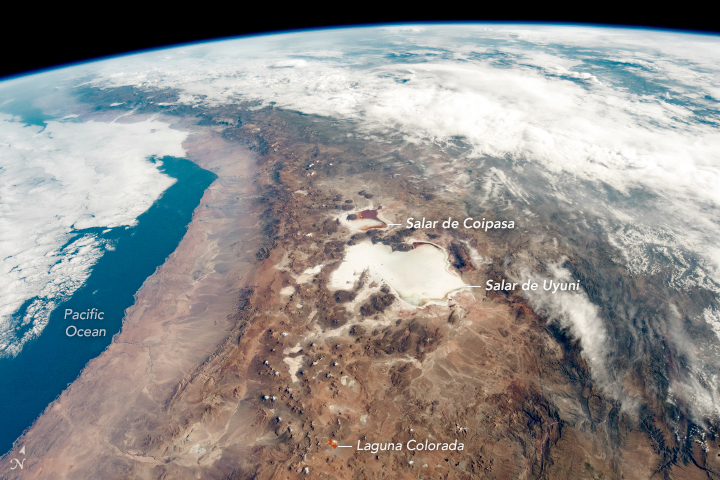 While orbiting over South America, an astronaut on the International Space Station shot this photograph of the Atacama Desert and the numerous salt flats in the Andes Mountains along the border of Chile and Bolivia. The centerpiece is the Salar de Uyuni, the largest salt flat on Earth. It regularly captures the attention of astronauts due to its high contrast against the brown landscape.

Salar de Uyuni and its smaller neighbor, Salar de Coipasa, have darker tones along their edges in this image. These dried lake beds are typically bright white in color, but rainfall can bring an influx of dark volcanic sediments. The region experienced rainfall in early February 2019, which caused temporary discoloration of the salars. By the time this image was taken in March 2019, the flats had started to shift back to their lighter colors.

Nearby, the much smaller Laguna Colorada displays bright hues thanks to algae that thrive in the salty water. To the west and northwest of the lake, some of the white dots are snow-capped volcanoes and mountains.

The salars receive less than 200 millimeters of rainfall per year. In contrast, the cloud-covered parts of Bolivia (north of the salars) see more than 1,750 mm of rain annually. The Andes Mountains create a rain shadow effect along the coast of northern Chile and western Bolivia, as air masses carrying moisture from the east drop most of their water before cooling and moving up over the mountains.

Along the coast, the Atacama Desert is one of the driest places on Earth, sometimes going years without rainfall. NASA uses the Atacama Desert to test rovers and other instruments because the area is a good analogue for future astrobiological exploration of Mars.

Astronaut photograph ISS059-E-517 was acquired on March 17, 2019, with a Nikon D5 digital camera using a 24 millimeter lens and is provided by the ISS Crew Earth Observations Facility and the Earth Science and Remote Sensing Unit, Johnson Space Center. The image was taken by a member of the Expedition 59 crew. The image has been cropped and enhanced to improve contrast, and lens artifacts have been removed. The International Space Station Program supports the laboratory as part of the ISS National Lab to help astronauts take pictures of Earth that will be of the greatest value to scientists and the public, and to make those images freely available on the Internet. Additional images taken by astronauts and cosmonauts can be viewed at the NASA/JSC Gateway to Astronaut Photography of Earth. Caption by Andrea Meado, Jacobs Technology, JETS Contract at NASA-JSC.

High altitudes in the Andes beget salt flats and rain shadows along the border of Chile and Bolivia. 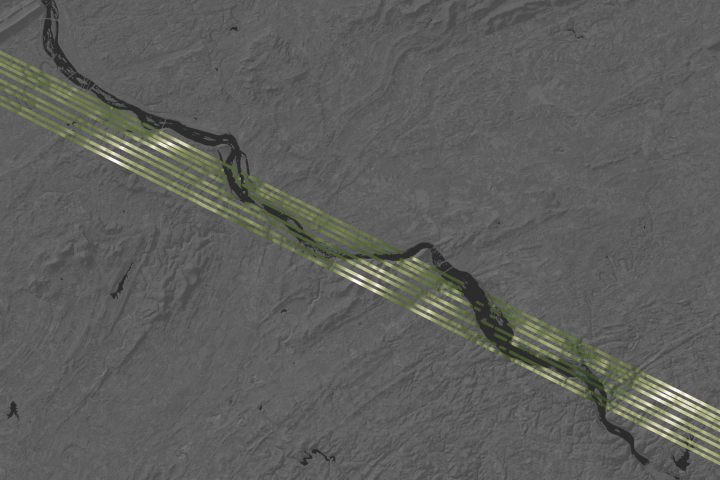