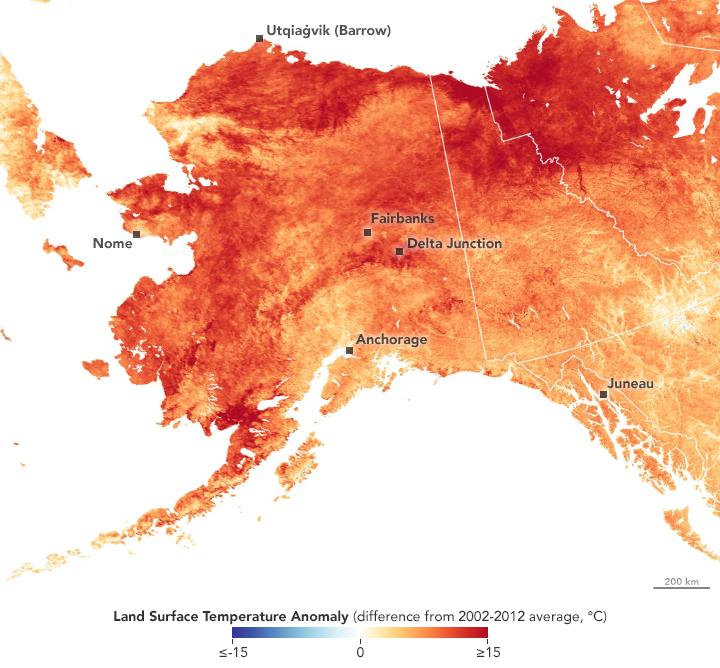 Forget the transition period between seasons: in March 2019, Alaska jumped from mid-winter right into late spring, setting monthly temperature records in many cities and towns. Meteorologists have noted that the unusually hot month was part of a long-term warming trend in the state in recent years.

The map above shows land surface temperature anomalies from March 1-31, 2019. Red colors depict areas that were hotter than average for the same month from 2000-2012; blues were colder than average. White pixels were normal, and gray pixels did not have enough data, most likely due to excessive cloud cover. This temperature anomaly map is based on data from the Moderate Resolution Imaging Spectroradiometer (MODIS) on NASA’s Aqua satellite.

March 2019 began with an unsettled weather pattern that brought warm, wet storms to the state, according to the Alaska Climate Research Center. By mid-month, a high-pressure ridge developed and stayed in place for weeks, producing mostly clear skies and very warm temperatures.

The average temperature for March 2019 set records at 10 of 19 ground-based weather stations in Alaska. Utqiaġvik (Barrow)—the northernmost town in the United States—saw its hottest March in more than 100 years. The town’s average high temperature in March is usually -12.6 degrees Fahrenheit (-24.7° Celsius). But in March 2019, the temperature averaged 5.9° Fahrenheit. Delta Junction, Fairbanks, and many towns broke temperature records. (You can see a list here.)

The “warm” month in Utqiaġvik did not mean it was a dry month. In March 2019, the town received more than four times the normal amount of rain and twice the amount of snow. 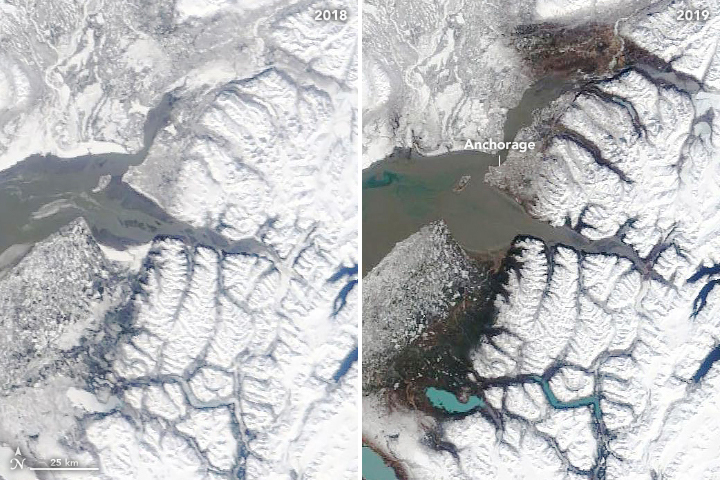 While the north and northwest parts of the state were wetter than usual, other parts were unusually dry. These natural-color images, acquired with MODIS on NASA’s Terra satellite, show Anchorage on March 30, 2018 (left), and March 30, 2019 (right). According to reports, March 2019 is only the second time on record that there was no measurable snowfall in Anchorage during the month.

Warm air temperatures, stormy weather, and warm sea surface temperatures have taken a toll on sea ice in the Bering Sea west of Alaska, bringing its extent even lower than in 2018. Typically, sea ice here reaches a maximum extent in March or early April. Images published by NOAA, however, show that by April 1, 2019, the sea was already largely free of ice. This melting in the Bering Sea put a large dent in the overall Arctic sea ice extent, which on April 1 hit a record low for the date.