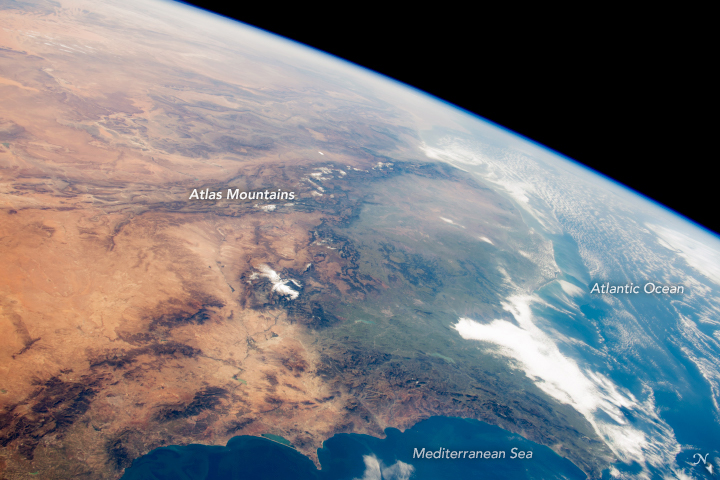 An astronaut onboard the International Space Station shot this oblique photograph while looking out across Morocco, where the Mediterranean Sea meets the Atlantic Ocean at the Strait of Gibraltar. The centerpiece of the image is the Atlas Mountains, which stretch 2,500 kilometers (1,500 miles) through Morocco, Algeria, and Tunisia.

Westerly winds from the Atlantic Ocean carry moisture into the region, but the mountains act as a weather barrier between the coastal grasslands and wetlands and the Sahara Desert. The Atlas Range causes a rain shadow effect, preventing the areas beyond the mountains from receiving much rainfall. During the winter months, the highest peaks of the Atlas Mountains are among the few parts of Africa to see snow.

The wetter regions along the Moroccan coastline include many Ramsar “Wetlands of International Importance,” which serve as wintering sites for migratory waterbirds.

Beyond the mountains, the dry climate of Morocco’s deserts creates an advantageous landscape for meteorite hunting. Strong winds and the lack of plant cover expose dark-colored meteorites and craters, which stand out against the light-colored sand. The dry climate preserves extraterrestrial rocks far better than a humid climate.

One of the most well-known space rocks found in Morocco is the Tissint meteorite that fell to Earth in 2011. This pristine Martian meteorite displays evidence of aqueous weathering—suggesting the presence of liquid water—and contains chemical elements originating from Mars soil.

Astronaut photograph ISS058-E-11388 was acquired on February 8, 2019, with a Nikon D5 digital camera using a 58 millimeter lens and is provided by the ISS Crew Earth Observations Facility and the Earth Science and Remote Sensing Unit, Johnson Space Center. The image was taken by a member of the Expedition 58 crew. The image has been cropped and enhanced to improve contrast, and lens artifacts have been removed. The International Space Station Program supports the laboratory as part of the ISS National Lab to help astronauts take pictures of Earth that will be of the greatest value to scientists and the public, and to make those images freely available on the Internet. Additional images taken by astronauts and cosmonauts can be viewed at the NASA/JSC Gateway to Astronaut Photography of Earth. Caption by Sarah Deitrick, Jacobs, JETS Contract at NASA-JSC.

Westerly winds from the Atlantic Ocean carry moisture into the region, but the Atlas Mountains act as a weather barrier between coastal grasslands and wetlands and the Sahara Desert.