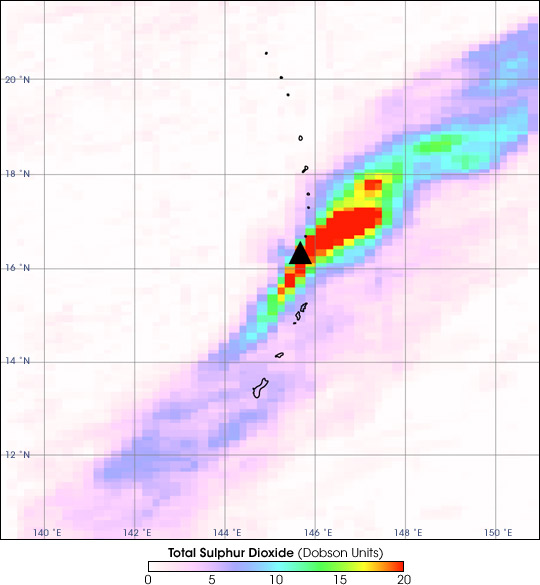 A long plume of sulfur dioxide extends northeast and southwest of the Anatahan volcano in the Northern Mariana Islands in the western Pacific Ocean. The volcano has been erupting almost continuously since January 5, 2005, when it started its third eruption in recorded history. This image, collected by the Ozone Monitoring Instrument on NASA’s Aura satellite, shows sulfur dioxide concentrations in the atmosphere between January 31 and February 4, 2005.

Sulfur dioxide is one of the gases that can be emitted in volcanic eruptions. Once in the atmosphere, sulfur dioxide combines with water to create a sulfuric acid haze. Called “vog,” this haze can cause illness and make breathing difficult. Volcanic haze grew so thick during the first week of February that the National Weather Service issued a volcanic haze advisory on Guam,where several illnesses were reported.

Added to the Aura satellite as part of a collaboration between the Netherlands’ Agency for Aerospace Programs and the Finnish Meteorological Institute, the Ozone Monitoring Instrument was tracks global ozone change and monitors aerosols like sulfates in the atmosphere.