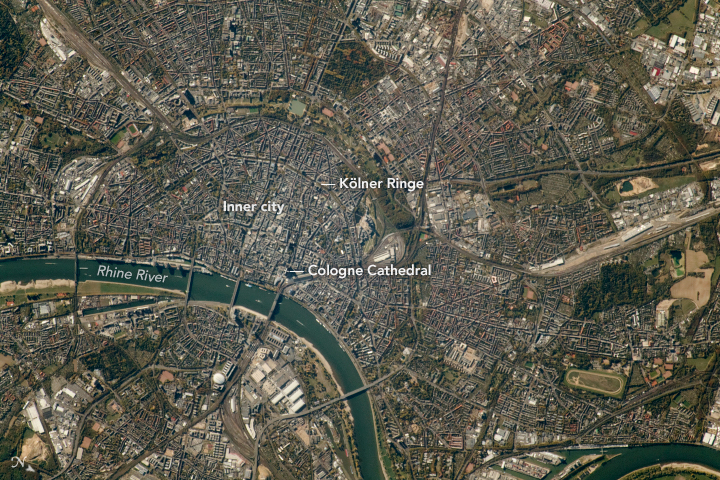 An astronaut aboard the International Space Station took this photograph of Cologne, Germany. With more than one million people, it is the fourth most populous city in Germany.

The Inner City of Cologne has a semicircular shape formed by a defensive wall that was built in medieval times to protect approximately 40,000 residents. This wall was demolished in the 1880s and replaced by a chain of semicircular boulevards called the Kölner Ringe (Cologne Ring), which allowed development to spread beyond the confines of the old town. However, the Inner City is still the focal point for shopping, commerce, and historic buildings—including the Cologne Cathedral, the largest Gothic church in northern Europe and the seat of the Archbishop of Cologne.

Due to the city’s location at the intersection of the Rhine River and one of the major trade routes between Eastern and Western Europe, Cologne became commercially important. Today it is a vital inland port and the busiest rail junction in Germany. The city is the cultural, historic, and economic capital of the Rhineland and is home to more than 30 museums and hundreds of galleries, ranging from contemporary graphics and sculpture to Roman archeological sites.

As one of the most heavily bombed cities in Germany during World War II, Cologne was almost destroyed. However, post-war efforts successfully rebuilt many historic buildings, which resulted in a distinct cityscape with a mixture of historic and 1950s modern-style buildings. The Cologne Cathedral was hit 14 times by aerial bombs during the war; despite being badly damaged, it remained standing in the flattened city. It was quickly rebuilt after the war and in 1996 was declared a UNESCO World Heritage Site. The Cathedral is now Germany’s most visited landmark, attracting 20,000 people per day.

Astronaut photograph ISS057-E-51223 was acquired on October 13, 2018, with a Nikon D5 digital camera using a 1600 millimeter lens and is provided by the ISS Crew Earth Observations Facility and the Earth Science and Remote Sensing Unit, Johnson Space Center. The image was taken by a member of the Expedition 57 crew. The image has been cropped and enhanced to improve contrast, and lens artifacts have been removed. The International Space Station Program supports the laboratory as part of the ISS National Lab to help astronauts take pictures of Earth that will be of the greatest value to scientists and the public, and to make those images freely available on the Internet. Additional images taken by astronauts and cosmonauts can be viewed at the NASA/JSC Gateway to Astronaut Photography of Earth. Caption by Sarah Deitrick, Jacobs, JETS Contract at NASA-JSC.

The city is the cultural, historic, and economic capital of the Rhineland, a vital inland port, and the busiest rail junction in Germany. 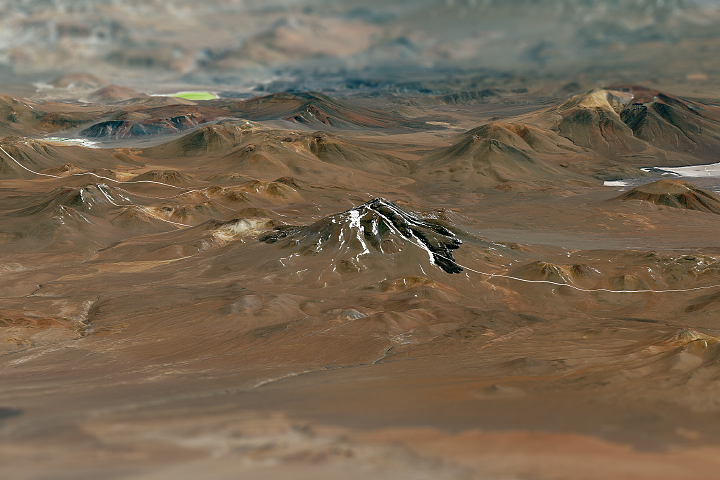 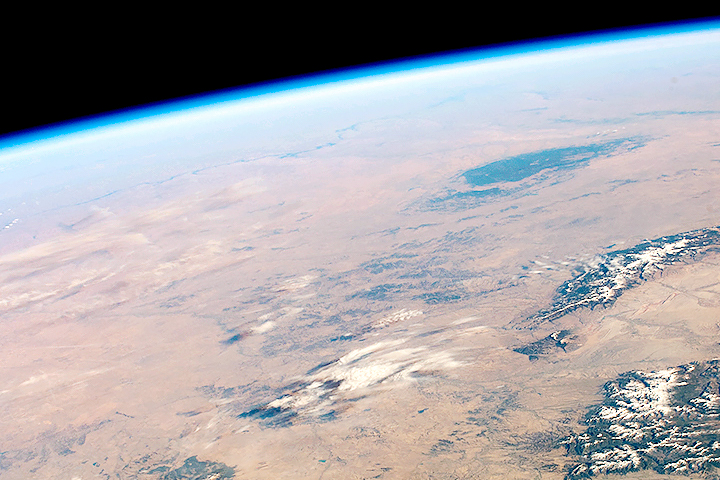