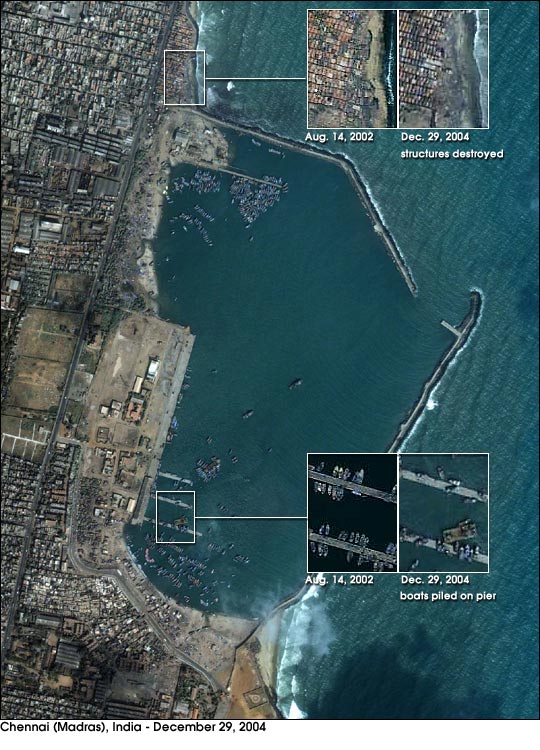 After the deadly tsunamis generated by the December 26, 2004, earthquake near Sumatra devastated the island of Sri Lanka off the southeastern tip of India, the waves continued westward and slammed into southeastern India, along a stretch of coastline called the Coromandel Coast. Cities, towns, and fishing villages up and down the coast of the state of Tamil Nadu were victims of the waves.

This image from the Ikonos satellite shows the city of Chennai, a harbor city on the southeastern Indian coast, located about 350 kilometers north of the Palk Strait, which separates Sri Lanka and India. The background image was captured on December 29, 2004, after the waves’ arrival. Although the devastation captured in this image may not seem as obvious as the damage to Sri Lanka, parts of Thailand, or northern Sumatra, a careful eye can see the impacts.

Two areas of damage have been cut away and shown at full resolution, in a comparison with imagery from August 14, 2002. Near the top of the image, a stretch of houses or other structures has been wiped out. Where the houses used to be is an open expanse of beach. Near the bottom of the image, boats that were neatly lined up in their moorings along three piers in the August 14 image are piled on top of the piers in the image from December 29. In the large image, other impacts are evident: sand and debris across roads, for example, and dramatic changes in the shape and size of some beaches.

On December 26, 2004, tsunamis swept across the Indian Ocean, spawned by a magnitude 9.0 earthquake off the coast of Sumatra.