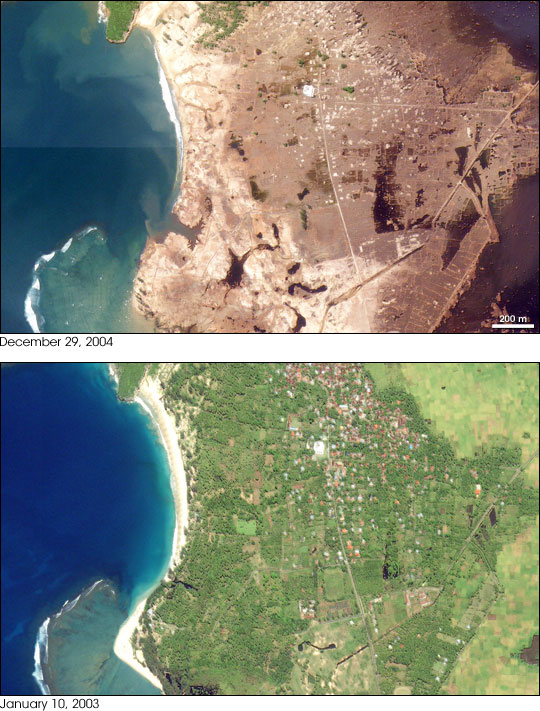 The Indonesian province of Aceh was hit hardest by the earthquake and tsunamis of December 26, 2004. Aceh is located on the northern tip of the island of Sumatra. Early Western media attention was focused on Sri Lanka and Thailand, even though the earthquake epicenter was closer to Aceh, and the largest waves struck the northwestern coast of Sumatra. On Decemebr 29, estimates of the death toll in Indonesia were over 80,000—more than half the global total. The town of Lhoknga, on the west coast of Sumatra near the capital of Aceh, Banda Aceh, was completely destroyed by the tsunami, with the exception of the mosque (white circular feature) in the city’s center.

These high-resolution satellite images, acquired by DigitalGlobe’s Ikonos satellite, show Lhoknga before (lower) and after (top) the earthquake and Tsunami. Almost all the trees, vegetation, and buildings in the area were washed away. Behind the town, low-lying agricultural areas remained covered with water four days after the disaster, and sand on the nearby beaches was completely removed. The wave height might have exceeded 15 meters (50 feet) when it struck the shore.

Equivalent devestation extends 225 kilometers southeast along the Sumatran Coast, in a band up to 3 kilometers (1.9 miles) deep. Imagery from the Moderate Resolution Imaging Spectroradiometer (above) shows the affected area as a thin strip of brown along the coast.

The island of Sumatra suffered from both the rumblings of the submarine earthquake and the tsunamis that were generated on December 26, 2004.