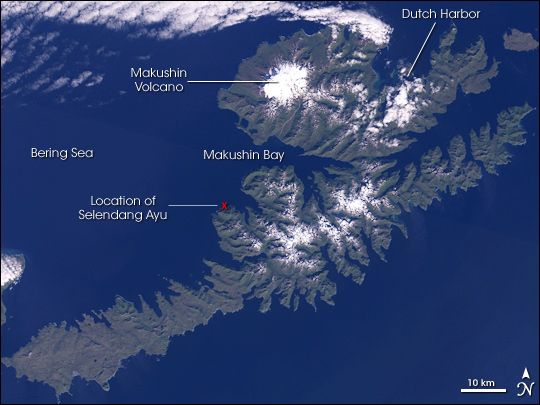 Adrift on the stormy Bering Sea, the Malaysian freighter Selendang Ayu ran aground just north of Skan Bay on Unalaska Island on December 8, 2004. The ship broke in half, spilling its cargo of soybeans and some of the oil it carried for fuel. The Selendang Ayu had been carrying 424,000 gallons of Intermediate Fuel Oil and 18,000 gallons of diesel. According to the Alaska Department of Environmental Conservation, at least 40,000 gallons of fuel spilled into the ocean, though more may be leaking from the ship. As of December 17, oil had been spotted hugging the northern shores of Unalaska Island from the northern shores of Makushin Bay past Pumicestone Bay, the long narrow inlet directly south of the wrecked vessel. Congealed tarballs, globs of sticky oil, cover a much broader region.

This true color image of Unalaska Island provides perspective on the extent of the spill. The image was acquired by the Enhanced Thematic Mapper Plus (ETM+) instrument aboard the Landsat 7 satellite on September 18, 2000, in a rare overflight with little cloud cover. The rugged and remote Aleutian Island is almost entirely a wildlife refuge, though some land is private. The island is home to both the shipping destination, Dutch Harbor, and the neighboring town, Unalaska.

The spill has the potential to severely impact environmentally sensitive regions on and near the island’s northwest coast where sea birds, sea lions, otters, seals, and salmon live. On December 19, the Alaska Department of Environmental Conservation reported that fifteen live oiled birds had been captured, and ten dead oil birds and a sea otter had been recovered.