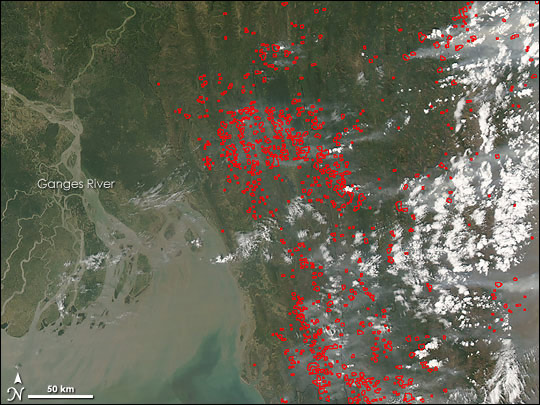 West of where the myriad channels of the Ganges River flow into the Bay of Bengal, numerous fires were burning in Bangladesh, India, and Myanmar on April 4, 2005. This image of the area on that day was captured by the Moderate Resolution Imaging Spectroradiometer (MODIS) on NASA’s Aqua satellite. Locations where MODIS detected actively burning fires are outlined in red.

The image, which is centered farther west than previous images in this series, focuses closely on scores of fires burning in India, just across the southeastern border of Bangladesh. In the large version of the image, fires are scattered across a wide portion of all three countries. Many of the fires are emitting large plumes of smoke, which drifts eastward.

MODIS cannot tell us specifically whether a fire is naturally occurring or caused by humans. However, the region's monsoonal climate is wrapping up its dry phase, which is typically a time for agricultural burning. In addition, Southeast Asia is experiencing one of its worst droughts in decades, which may be elevating the risk of both accidental and natural wildfires. The fires detected by MODIS, therefore, may be a mixture of both types of burning. The large image provided above has a spatial resolution of 250 meters per pixel. The MODIS Rapid Response Team provides the image at additional resolutions.

In March and April 2005, India, Myanmar, Thailand, Cambodia, Vietnam, and southern China were experiencing some of the most severe drought conditions in decades. Fires filled the skies with smoke.