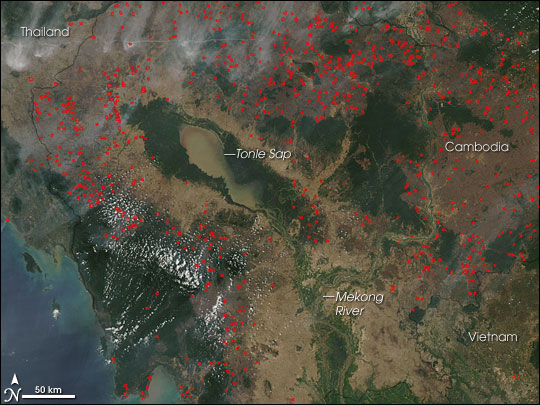 On January 28, 2007, the Moderate Resolution Imaging Spectroradiometer (MODIS) on NASA’s Aqua satellite captured this image of scores of fires burning across Southeast Asia, mostly in Cambodia around the Tonle Sap. Places where MODIS detected actively burning fires are marked in red.

In Cambodia, the dry season of the monsoon generally spans the months of November through April. During that time, people ignite a host of agricultural and accidental fires across the country. The causes of the fires vary, from fires set to burn pasture lands in anticipation of new growth from summer rains, to clearing of forests through slash-and-burn agriculture. Although agricultural fires are not necessarily immediately hazardous, such large-scale burning can have a strong impact on weather, climate, human health, and natural resources.

The high-resolution image provided above has a spatial resolution of 250 meters per pixel. The MODIS Rapid Response Team provides twice-daily images of the area in a variety of resolutions and formats.