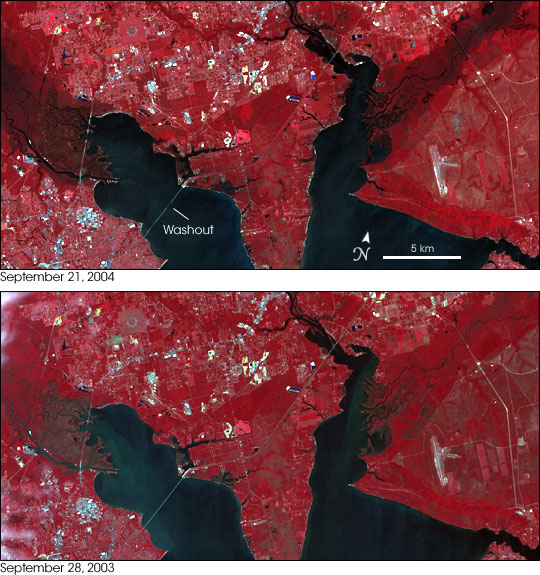 Interstate 10 is a heavily traveled roadway connecting Florida’s panhandle to the west. The road stretches from the eastern shore of northern Florida to Los Angeles, California, skirting the Gulf shore to Houston, then following the Mexican border to California. Just before leaving Florida, a traveler on I-10 would cross Escambia Bay near Pensacola. That was before Hurricane Ivan blasted through the Florida panhandle. The storm’s fierce 130-mile-per-hour winds and possibly its storm surge cut through the bridge, leaving a wide gap in Interstate 10. The gap is visible in this image, acquired by the Advanced Spaceborne Thermal Emission and Reflection Radiometer (ASTER) aboard NASA’s Terra satellite on September 21, 2004, five days after Ivan made landfall. The road forms a thin white line across the dark waters of Escambia Bay in a comparison image, taken on September 28, 2003. In the 2004 image, the line is broken.

Further evidence of Ivan’s fury is visible in the top image. Large tracts of darker red regions along the Escambia River, left, and the Yellow River, right, are probably flooded.

This pair of false-color composite images was made by combining the near infrared, red, and green wavelengths (ASTER bands 3, 2, & 1), making vegetation appear red and water look black.

When Hurricane Ivan blasted through Pensacola, Florida, it cut apart a bridge on the heavily traveled Interstate 10. The gap in the bridge is visible in this ASTER image, acquired on September 21, 2004.