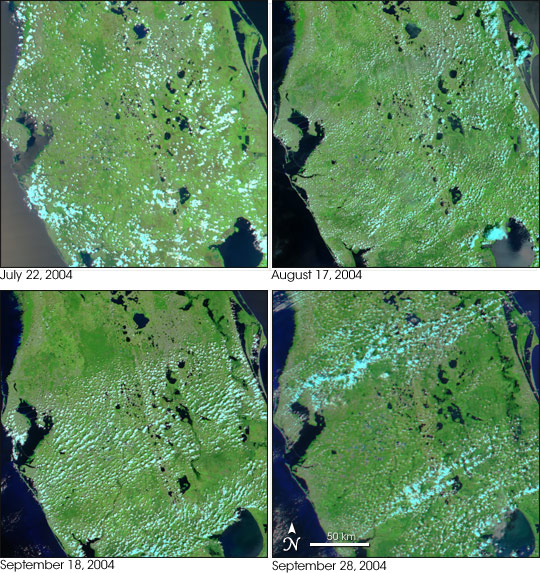 A rapid succession of four hurricanes over a period of six weeks has taken a toll on the river and lakes of Florida. This series of false-color images tracks the changes in Central Florida where Hurricanes Charley, Frances, and Jeanne came ashore. The Moderate Resolution Imaging Spectroradiometer (MODIS) on NASA’s Terra and Aqua satellites captured all of these images, in which water is black, vegetation is green, and clouds are light blue.

The first image was acquired on July 22, 2004, before any of the storms affected the region. Lake Okeechobee is the large body of water in the lower right corner of the image, and Charlotte Harbor is the southernmost body of water on the western shore. On August 13, Hurricane Charley made a surprise landfall over Punta Gorda, Florida, as a Category 4 Hurricane on the Saffir-Simpson Hurricane Scale. From Punta Gorda, which is on the northeast side of Charlotte Harbor, Charley moved northeast across Florida into the Atlantic Ocean. The changes between July 22 and August 17 are subtle. The mouth of the Peace River on the northeast corner of Charlotte Harbor looks a little larger, and the Manatee River just below Tampa Bay, left center, also looks swollen. A few of the lakes in the center of Florida also look larger than they did previously.

On September 5, Florida’s second major hurricane slammed ashore near Stuart, on the eastern shore of Florida, almost directly opposite Charley’s landfall. Throughout the day on September 5, Frances moved slowly northwest across Florida, crossing the same regions Charley had just three weeks before. In the time between Frances and Florida’s next storm, Hurricane Ivan, MODIS captured no cloud-free images. However, the view after Ivan’s landfall shows marked changes in the region.

Hurricane Ivan pummeled northwest Florida and Alabama on September 16, before moving north across Alabama and Georgia. Though the storm did not directly affect the region shown in these images, flooding is clearly evident in the post-storm image acquired on September 18. It is likely that much of this flooding was induced by Hurricane Frances, but it is also possible that some the flooding is being caused by runoff from Ivan-related rainfall in the north. The most obvious change is in Lake Harney, west of the “v”-shaped Cape Canaveral on Florida’s east coast. The lake and the river running from it, St Johns River, are not clearly visible on July 22. By September 18, a black smudge over the area reveals an excess of water. The Kissimmee River running from Lake Kissimmee to Lake Okeechobee also looks flooded, as does the Peace River northeast of Charlotte Harbor.

The final hurricane to ravage Florida in September and August was Hurricane Jeanne, which came ashore on September 26 over Fort Pierce, just a few miles north of the point where Frances made landfall. Like Frances, Jeanne moved northwest across Florida, dumping heavy rain on regions already soaked by previous storms. The cumulative effect of four hurricanes is seen in the final image, acquired on September 28, 2004. Most notably, St. Johns River west of Cape Canaveral is greatly swollen.