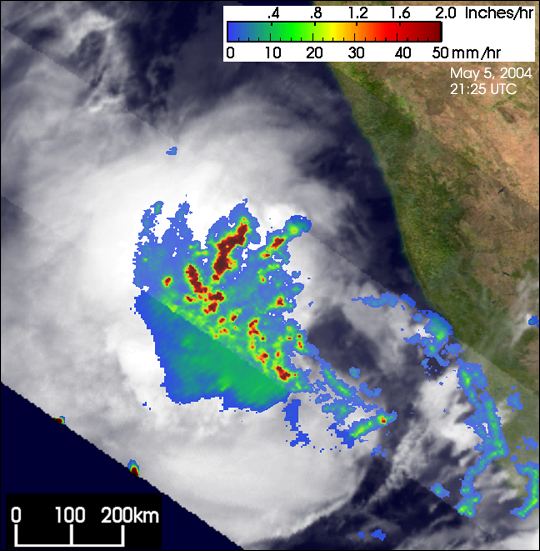 Cyclone 01A hovered just off the west coast of India this past week slowly drifting parallel to the coastline without coming ashore. It began as a weak depression that formed on the 4th of May 2004 about 200 km east of the southwest coast of India in the Laccadive Sea. The system strengthened into a tropical storm the next day on the 5th with winds estimated at 35 knots (40 mph) by the Joint Typhoon Warning Center. On the 7th and 8th, the stormed reached its peak intensity of just 45 knots (52 mph) before weakening back into a depression on the 10th. The storm was responsible for 5 deaths in India from heavy rains.

The Tropical Rainfall Measuring Mission (TRMM) satellite captured several images of the cyclone as it drifted northward in the western Indian Ocean. The first image taken at 21:25 UTC on 5 May 2004 shows rainfall within the storm as seen by the TRMM satellite. Rain rates in the center swath are from the TRMM Precipitation Radar (PR), and rain rates in the outer swath are from the TRMM Microwave Imager (TMI). The rain rates are overlaid on infrared (IR) data from the TRMM Visible Infrared Scanner (VIRS). This first image shows that the rain field associated with the storm is very asymmetrical with almost all of the rain falling west of the center, which lacks an eyewall, a characteristic of immature or weaker systems. Several patches of intense rain (darker reds) are embedded within a broad shield of moderate (green) to light rain (blue). The second image taken at 11:20 UTC on the 7th shows the system has not become any better organized. The area of heavy rain (dark red) is consolidated into one band, but there is still no evidence of an eyewall. In the final snapshot at 11:07 UTC on the 9th, the center is now completely devoid of rainfall without which the storm cannot survive as tropical cyclones rely on heat released from the conversion of water vapor to fuel their circulations. This image does reveal that the system is still capable of producing heavy rains over land well away from the center as shown by the dark red areas over the coastline.

The TRMM-based, near-real time Multi-satellite Precipitation Analysis (MPA) at the NASA Goddard Space Flight Center monitors rainfall over the global tropics. The last image gives MPA rainfall totals for the period 3-11 May 2004 associated with the passage of the cyclone. The highest amounts on the order of 12 inches fell over water (dark red areas). However, some coastal areas in the state of Gujarat did receive up to 9 inches locally (red areas) with several areas receiving between 3 and 6 inches (green areas).

The Tropical Rainfall Measuring Mission (TRMM) satellite captured several images of Tropical Cyclone 01A as it drifted northward in the western Indian Ocean.