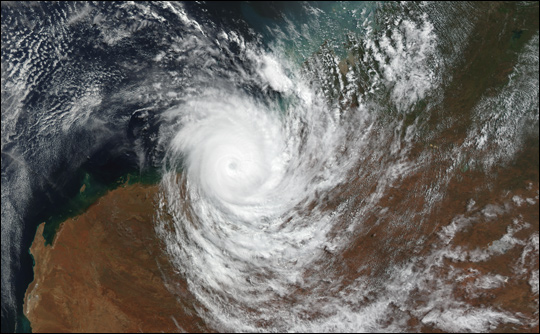 Tropical Cyclone Fay finally came ashore over Western Australia’s Pilbara coast on March 27, 2004. At that time, the storm carried winds that gusted up to 200 kilometers per hour (124 miles per hour). Fortunately, the storm made landfall in a sparsely populated region, and relatively little damage has been reported. The Moderate Resolution Imaging Spectroradiometer (MODIS) on the Terra satellite captured this image of the storm over the Western Australian coast on March 27, 2004.

The high-resolution image provided above is at MODIS ’ maximum resolution of 250 meters per pixel.

Tropical Cyclone Fay first developed into a tropical depression on the 16th of March 2004 in the Timor Sea west of Bathurst Island off the northern coast of Australia. Just twelve hours after becoming a depression, Fay became a named tropical storm with winds estimated at 35 knots (40 mph).