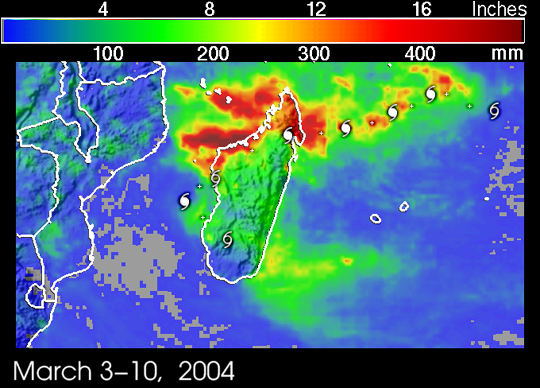 Gafilo struck the northeast coast of Madagascar early on the morning of the 7th of March 2004 (LST) as a very powerful Category 5 cyclone with winds estimated at 160 mph. So far, at least 25 people have been reported dead on Madagascar not counting a further 111 feared drowned on a ferry that was lost in the storm and reported to have capsized in heavy seas by two survivors. After making landfall on the northeast coast, Gafilo cut across the northern part of the island moving southwest leaving as many as 100,000 people homeless in its wake before re-emerging over the waters of the Mozambique Channel on March 8th. Out over the channel, Gafilo recurved heading southeast. It briefly regaining Category 1 strength over open waters. The storm then made landfall again on the night of the 9th along the southwest coast of Madagascar and crossed the island yet again, this time over the southern part of the island. Gafilo is finally forecast to exit the southeast coastline of Madagascar on the evening of the 11th and head back out into the western Indian ocean as a weak tropical storm.

The TRMM-based, near-real time Multi-satellite Precipitation Analysis (MPA) at the NASA Goddard Space Flight Center monitors rainfall over the global tropics. MPA rainfall totals are shown for the period 3-10 March 2004 for the area over and around Madagascar. Cyclone symbols mark the 06Z positions of Gafilo along its path. As the storm approaches Madagascar from the east, the heaviest rainfall totals, on the order of 12 inches (orange-red areas), appear close to the center of the storm track. As the systems crosses land, the higher totals appear to the right of the storm track and are on the order of 15 inches of rain (red area) over the northern tip of Madagascar. The heaviest totals of up to 20 inches (darkest reds) stretch from the central Mozambique Channel eastward to along the northwest coastline of Madagascar. These totals appear to be associated with an intense, east-west oriented rainband that was observed by TRMM on March 8 (see the previous story on Gafilo) well north of the storm's center. Rainfall totals are significantly less though still on the order of 4 to 8 inches (green areas) over southern and central Madagascar.