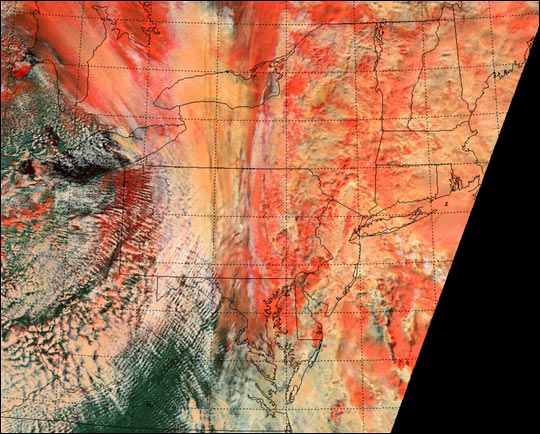 A slow moving winter storm settled over the northeastern United States Sunday evening (March 4, 2001), merging one system that brought plenty of moist air from the Gulf of Mexico with another system that brought frigid temperatures southward from Canada. Today (March 5) these merging systems formed a low-pressure trough off the New Jersey coast, drawing in a new influx of moisture from the Atlantic and sweeping it inland in a large-scale counter-clockwise pattern, thus intensifying the strength of the storm. Officials across all New England states are now braced for what could become a major winter storm, dumping as much as 2 feet of snow in some areas over the next 48 hours.

This false-color composite image shows the western half of the winter storm over the northeastern United States. This scene was acquired at 11:46 a.m. EST today (March 5) by the Moderate-resolution Imaging Spectroradiometer (MODIS), flying aboard NASA's Terra spacecraft, and processed by the University of Wisconsin-Madison's MODIS direct broadcast receiving facility. In this scene, there appears to be cold air moving in from the northwest, as the system as a whole moves toward the northeast while being fed with moisture and energy from the Atlantic Ocean. The feature in the top center of the image appears to be a large jet of moisture wrapping around the back side of the storm system.

At visible wavelengths of light (e.g., 0.66 microns), snow cover is as bright as clouds and is therefore difficult to distinguish from cloud cover. However, at near-infrared wavelengths (e.g., 1.6 microns), snow cover absorbs sunlight and therefore appears much darker than clouds. This allows MODIS to discriminate between snow cover and clouds very effectively. In this scene, land surfaces are green, water surfaces are black, snow cover is red, and clouds are white. Those clouds that contain a significant fraction of ice and snow particles appear pinkish and progressively more red the greater the snow and ice content.