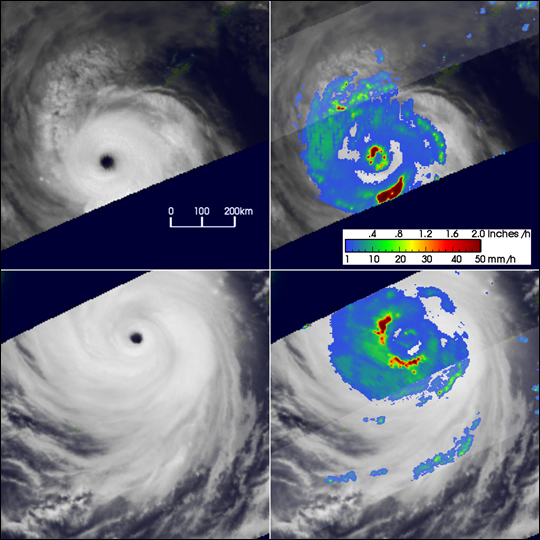 The Tropical Rainfall Measuring Mission (TRMM) satellite has provided some remarkable images of Super Typhoon Maemi in the western Pacific from its organization into a minimal typhoon well east of the Philippines to its height as a super typhoon with winds over 155 mph as it was approaching the southern Ryuku Islands. During the storm’s most intense phase, TRMM was able to capture the evolution of Maemi’s eyewall structure as it was starting to undergo a process known as "eyewall replacement," whereby two concentric eyewalls are present before the outer eyewall collapses down to replace the original inner eyewall. This process can occur in very intense typhoons and hurricanes.

The first image (top two panels) was taken at 10:58 UTC on 10 September 2003, just as Maemi was approaching the southern Ryuku Islands. At that time, Maemi was classified as a Category 5 super typhoon by the Joint Typhoon Warning Center with sustained winds estimated at 170 mph. The left panel shows an infrared (IR) image from the TRMM Visible Infrared Scanner (VIRS). In it, Maemi appears very symmetrical with a well-defined eye and good cirrus outflow. In the right panel, rainfall rates from the TRMM Precipitation Radar (PR) and TRMM Microwave Imager (TMI), which contains the center of the storm, are overlaid on the VIRS data. Though the heaviest rainfall rates (darker reds) are located on the northwest side of the eyewall, moderate (green) to intense (darker reds) rainfall rates are contained throughout a well-defined tight inner eyewall. This inner core is surrounded by a ring of minimal rainfall rates with a broader band of moderate to intense rainfall outside of that.

The next image (lower panels) was taken almost 24 hours later at 10:02 UTC on September 11. Again the VIRS IR image (left panel) shows a symmetrical storm with an even smaller well-defined eye and a broad cirrus outflow. The rainfall structure (right panel) is now very different, however. It shows that the innermost core of rainfall associated with the original eyewall, has weakened significantly. Instead, a new second eyewall, shown by the sharp ring of moderate (green areas) to intense (darker red areas) rainfall rates further out from the center, is emerging and has contracted towards the center though ultimately it would not replace the inner the eyewall. At the time of the second images, Maemi had winds estimated at 155 mph and had just passed the southern Ryuku Islands.

The Tropical Rainfall Measuring Mission (TRMM) satellite has provided some remarkable images of Super Typhoon Maemi in the western Pacific from its organization into a minimal typhoon well east of the Philippines to its height as a super typhoon with winds over 155 mph as it was approaching the southern Ryuku Islands.