Ash Plume from the Cleveland Volcano 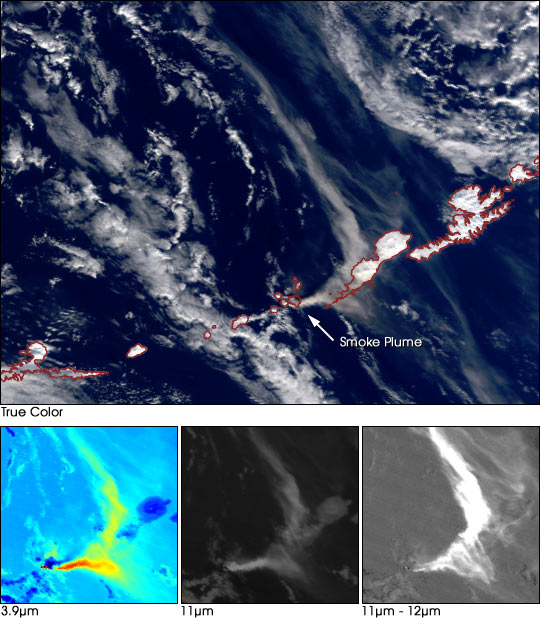 On February 19, 2001, the Cleveland Volcano erupted explosively, sending a thick plume of smoke and ash high into the atmosphere that was easily visible to overpassing satellites. Mount Cleveland is a 5,675-foot-tall (1,730 meters) stratovolcano on the west side of Chuginadak Island. Chuginadak is a remote, uninhabited island located roughly in the middle of the chain of Aleutian Islands extending westward from the southwestern coast of Alaska. Mount Cleveland is one of the most active volcanoes in the Aleutian Islands; it erupted last in May 1994. In June of 1944, the volcano erupted while a small number of U.S. soldiers were stationed there, killing one.

In this true-color image acquired on February 19, 2001, by the Moderate-resolution Imaging Spectroradiometer (MODIS), flying aboard NASA’s Terra satellite, you can see the column of smoke and ash (brown and grey pixels) blowing eastward (right) and then curving back towards the north (up). In these visible wavelengths, the ash cloud is hard to distinguish from other clouds in the area, and even the snow-covered Aleutian Islands.

However, the MODIS sensor is also sensitive to infrared wavelengths, and these provide a few better ways of seeing the volcano’s ash. At mid-infrared wavelengths [3.9µm, bottom left image (cooler and darker pixels are blue, warmer and brighter pixels are red)], MODIS detects both emitted heat and scattered light. The small cluster of red pixels to the lower left of the ash plume is the heat of the magma inside the volcano. The yellow and red pixels in the curving plume itself are from infrared light that was scattered by the ash particles. Clouds and snow are cold, and they do not scatter or reflect light in this wavelength, so they appear dark blue.

MODIS also collects data in the thermal infrared wavelengths. The bottom center image shows the eruption at 11µm. Radiation at this wavelength is emitted from the clouds sea, snow, and ash—the warmer the surface, the more radiation it emits. Because this image has been inverted dark pixels (like the volcano itself) are dark, and cold surfaces, like the high-altitude ash and high clouds, are bright. Again, it is hard to distinguish ash from clouds, but the snow-covered mountains of the Aleutians are a bit warmer (and therefore darker) than the clouds and ash bumping up against the stratosphere.

The best view of the ash is created by subtracting the brightness of one thermal infrared wavelength (12µm) from another (11µm), as shown in the bottom right image. The 11µm and 12µm images vary slightly, because the ash radiates at a different intensity than the water vapor in clouds, even though they are both the same temperature. The difference is magnified by subtracting one channel from the other, which results in an image where the ash plume stands out clearly.

One of the most active volcanoes in the Aleutian Islands erupted in February 2001.