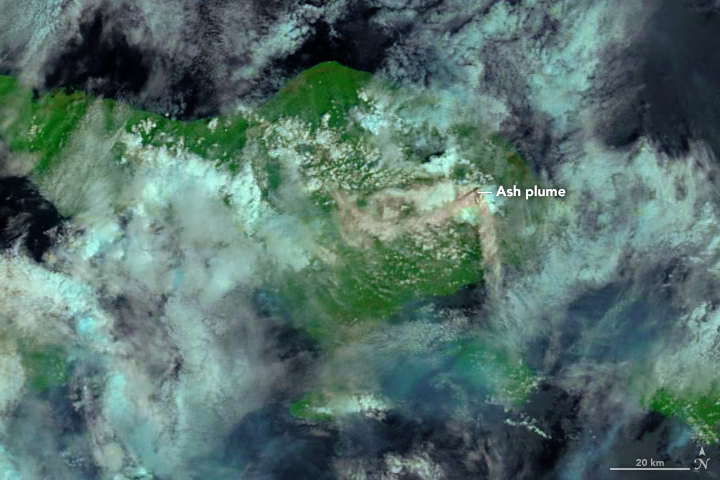 Mount Agung continues to erupt, ejecting a volcanic plume of gas and ash over the Indonesian island of Bali. The ash is visible amidst midday clouds in this false-color image, acquired on November 29, 2017, by the Moderate Resolution Imaging Spectroradiometer (MODIS) on NASA’s Terra satellite. The image uses a combination of shortwave infrared light and natural color, making it easier to differentiate between ash, clouds, and forest.

The plume appears to rise from two vents in the volcano’s crater. Just as the plume’s sulfur dioxide levels can vary, so too can the amount of steam and ash. A whiter plume indicates the presence of more steam, while a darker plume indicates more ash. Volcanic steam, lava, and ash tend to have local and regional effects, while gas emissions can sometimes have global consequences.

“The current eruption of Mount Agung is not yet energetic enough to affect global temperatures in the way that Mount Pinatubo did after its eruption in 1991,” said David Considine of NASA’s Earth Science Division. “To do that, the Agung eruption would have to deposit a significant amount of sulfate aerosol in the lower stratosphere, which in the tropics means higher than 10 miles in altitude. The current eruption height is about 6 miles, so fairly far below what is necessary to result in an appreciable global effect on surface temperatures.”