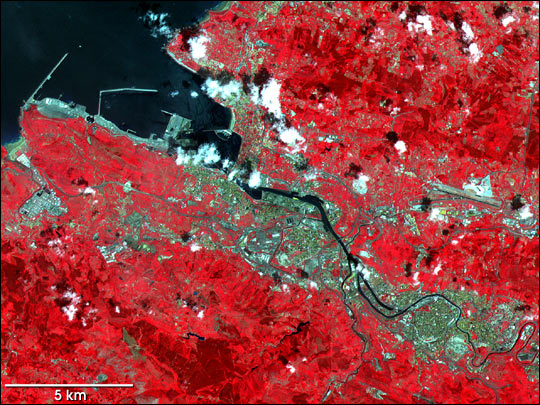 Bilbao, capital of Provincia de Vizcaya in northern Spain, consists of old and new sections connected by several bridges spanning the Rio Nervion. The old part of the city occupies the east bank of the river, and its modern offshoot, dating from the late 19th century, sits opposite. In 1983 a flood severely damaged the old section of Bilbao, but it has since been restored.

One of the major industrial centers of Spain, Bilbao lies within a large iron ore mining region, near the Bay of Biscay. The chief industries here employ workers in shipbuilding and in the manufacture of iron and steel, as well as cement, chemicals, machinery, and paper. The city is also an important seaport. Commodities brokers export iron ore, grain cereals, and wine, among other goods.

This false-color infrared composite image of Bilbao was acquired by the Advanced Spaceborne Thermal Emission and Reflection Radiometer (ASTER), flying aboard NASA's Terra spacecraft, on July 5, 2000. The scene spans a total area 25 km wide by 24 km tall. The reds and dark reds show vegetated areas. The dark blue pixels (upper left) are where the waters of the Rio Nervion empty into the Bay of Biscay. Bright white pixels are clouds and you can see their shadows on the surface slightly offset toward the northwest. Light blue pixels show the human developments in and around Bilbao.