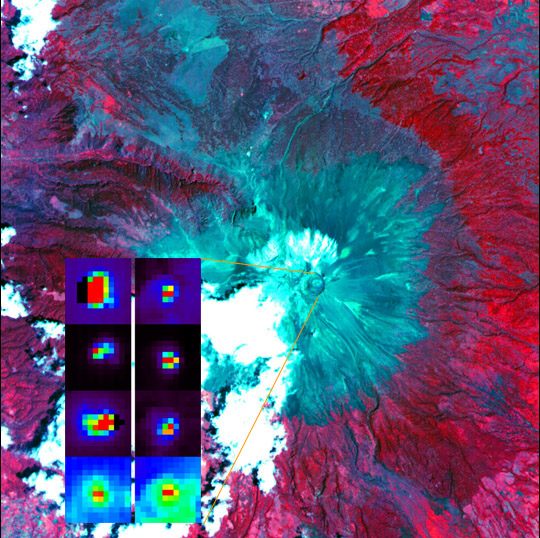 From its space-based perspective aboard NASA's Terra satellite, the Advanced Spaceborne Thermal Emission and Reflection Radiometer (ASTER) was watching as Popocatepetl awoke from its slumber late last year. Using a combination of its visible and near-infrared channels, ASTER acquired this false-color composite image of the volcano on September 6, 2000.

In this scene, red pixels represent vegetation, the bright white pixels are clouds, and blue pixels show bare rocks. A town is also visible to the northeast of the volcano.

The image chips are all color-coded so that red pixels show the hottest areas while orange, yellow, green, blue, purple, and black pixels are progressively colder. All four dates show the presence of a hot lava dome in the summit crater. Changes in the size of the hot spots indicate growth of the lava dome, or increase in temperature over time.