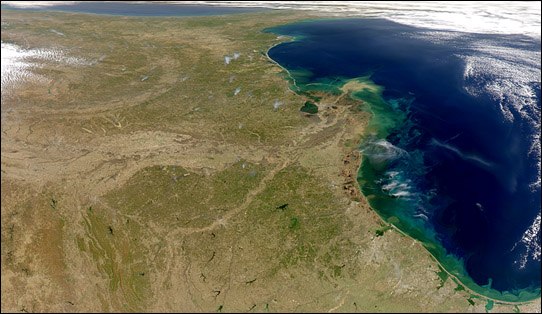 Quite a number of smoke plumes were visible from orbit on Monday, February 5, 2001, as can be seen in this Sea-viewing Wide Field-of-view Sensor (SeaWiFS) image of the southeastern United States. Gauging from this perspective, the OrbView-2 satellite was somewhere over northern Texas when this scene was acquired. SeaWiFS was looking toward the east (north is toward the left).

In the top center of the image, the state of Florida just disappears over the horizon. Running vertically down the right center of the image is the Gulf Coastline. The smoke plumes are to the north of the coastline, in the states of Alabama, Mississippi, and Louisiana.

The thick brown plume of sediment from the Mississippi River outflow into the Gulf of Mexico can be seen clearly. Also, there are numerous pools of brown, sediment-laden water which can be seen emerging along much of the Louisiana and Texas coastline.

Smoke from Alaskan Fires over Louisiana

This image of the southern United States f is a picture-perfect example of what meteorologists mean when they describe the atmosphere as a fluid. In the center of the image, an airborne river of smoke from fires raging across Alaska is flowing down the Mississippi River corridor and spreading out across the shoreline of the Gulf of Mexico, at the bottom of the scene.

Smoke from Fires in Central America Drifts over Texas

Smoke from fires in tropical Mexico and Central America drifted over the U.S. Gulf States.