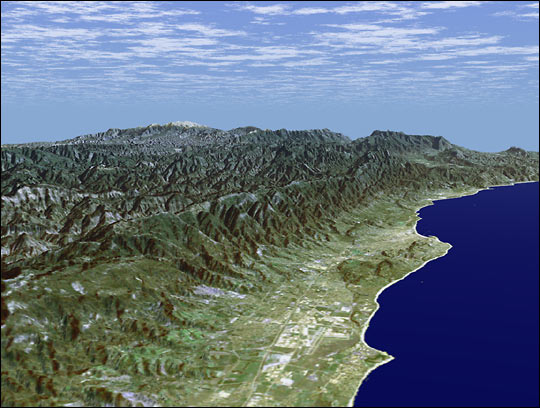 Santa Barbara, California, is often called "America's Riviera." It enjoys a Mediterranean climate, a mountain backdrop, and a long and varied coastline. This perspective view of the Santa Barbara region was generated using data from the Shuttle Radar Topography Mission (SRTM) and an enhanced Landsat satellite image. The view is toward the southeast, from the Goleta Valley in the foreground to a snow-capped Mount Abel (elevation 2526 m or 8286 feet) along the skyline. The coast here generally faces south. Consequently, Fall and Winter sunrises occur over the ocean, which is unusual for the U.S. west coast. The Santa Barbara "back country" is very rugged and largely remains as undeveloped wilderness and an important watershed for local communities. Landsat has been providing visible and infrared views of the Earth since 1972. SRTM elevation data match the 30-meter resolution of most Landsat images and will substantially help in analyses of the large and growing Landsat image archive. For visualization purposes, topographic heights displayed in this image are exaggerated two times. Colors approximate natural colors.

The elevation data used in this image was acquired by SRTM aboard the Space Shuttle Endeavour, launched on February 11, 2000. SRTM used the same radar instrument that comprised the Spaceborne Imaging Radar-C/X-Band Synthetic Aperture Radar (SIR-C/X-SAR) that flew twice on Endeavour in 1994. SRTM was designed to collect three-dimensional measurements of Earth's land surface.